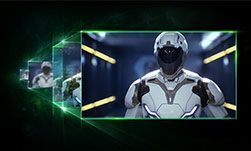 There’s a new standard in gaming — and system optimizations have set the bar high.

From AI-accelerated techniques like Deep Learning Super Sampling (DLSS) to powerful SDKs like NVIDIA Reflex, game developers are using the most advanced tools to reduce input latency and increase frame rates for gamers.

DLSS is an advanced image upscaling technology that uses a deep learning neural network to  boost frame rates and produce beautiful, sharp images for games. NVIDIA set out to redefine real-time rendering through AI-based super resolution — rendering a fraction of the original pixels and then using AI to reconstruct sharp, higher resolution images.

As a developer, System Latency (click-to-display) can be one of the hardest metrics to optimize for. In addition to latency reduction functions, the SDK also features measurement markers to calculate both Game and Render Latency — this feature is great for debugging and visualizing in-game performance counters.

You’ll have the opportunity to learn more about DLSS and NVIDIA Reflex at the GPU Technology Conference next month, as well as have the chance to ask NVIDIA experts questions about the technology

Register for free to attend these sessions and learn about the experience of game developers who worked on popular titles, including Minecraft, Cyberpunk 2077, Overwatch and LEGO Builder’s Journey.

And don’t forget to explore through more than 20 game development sessions at GTC.