Game and professional visualization developers need the best tools to create the best games and real-time interactive content. Read this article to find out what NVIDIA technologies will provide developers optimal real time ray tracing within their workflows.

To help them achieve this goal, NVIDIA has pioneered real-time ray tracing hardware with the launch of the RTX 20 series.

Today, we continue to develop and expand powerful tools for developers by creating SDKs that run on RTX GPUs.

RTXDI offers realistic lighting and shadows of dynamic scenes involving millions of lights which, until now, would have been prohibitively expensive for real-time applications. Traditionally, most lighting is baked offline, computing just a handful of “hero” dynamic lights at runtime. RTXDI pushes past those limits and allows developers to elevate the visual fidelity in their games. 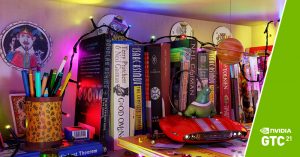 RTXGI provides developers with a scalable solution for multi-bounce indirect lighting without light leakage, time-intensive offline lightmap baking, or expensive per-frame costs. RTXGI’s dynamic, real-time global illumination is not only beautiful in action, but it streamlines the content creation process by removing barriers that previously prevented artists from rapidly iterating. With a low performance cost and massive productivity gains, RTXGI is an ideal starting point to bring the benefits of ray tracing to your content.

Get the optimal real-time ray tracing performance with NRD, a library of spatial and spatio-temporal API-agnostic denoisers. From the beginning, NRD was specifically designed to work well with low ray budgets. With NRD, developers can create visuals that rival ground-truth images with as little as a half of a ray cast per pixel.

Get the latest news and updates about these SDKs at next month’s GPU Technology Conference. Registration is free — join us and hear from experts who worked on popular game titles, including Minecraft, Cyberpunk 2077, Overwatch and LEGO Builder’s Journey.

Explore the sessions for game developers and learn how you can integrate NVIDIA tools and technologies into games.