A new ingredient mapping tool by Sony AI and Korea University uses molecular science and recipe data to predict how two ingredients will pair together.

It’s not just gourmet chefs who can discover new flavor combinations— a new ingredient mapping tool by Sony AI and Korea University uses molecular science and recipe data to predict how two ingredients will pair together and suggest new mash-ups.

Dubbed FlavorGraph, the graph embedding model was trained on a million recipes and chemical structure data from more than 1,500 flavor molecules. The researchers used PyTorch, CUDA and an NVIDIA TITAN GPU to train and test their large-scale food graph.

Researchers have previously used molecular science to explain classic flavor pairings such as garlic and ginger, cheese and tomato, or pork and apple — determining that ingredients with common dominant flavor molecules combine well. In the FlavorGraph database, flavor molecule information was grouped into profiles such as bitter, fruity, and sweet.

But other ingredient pairings have different chemical makeups, prompting the team to incorporate recipes into the database as well, giving the model insight into ways flavors have been combined in the past.

“The outcome is pairing suggestions that achieve better results than ever before,” wrote Korea University researcher Donghyeon Park and Fred Gifford, strategy and partnerships manager at Sony. “These suggestions can be used to predict relationships between compounds and foods, hinting at new and exciting recipe techniques and driving new perspectives on food science in general.”

Featuring in Scientific Reports, FlavorGraph shows the connections between flavor profiles and the underlying chemical compounds in specific foods. It’s based on the metapath2vec model, and outperforms other baseline methods for food clustering. 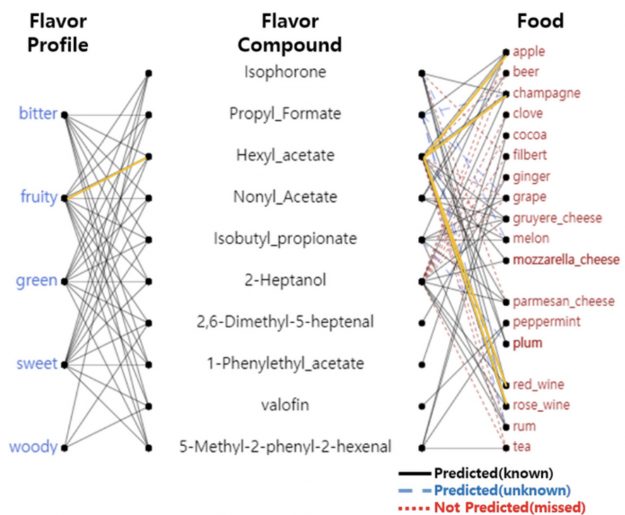 The researchers hope the project will lead to the discovery of new recipes, more interesting flavor combinations, and potential substitutes for unhealthy or unsustainable ingredients.

“We hope that projects like this will continue to complement both the complex ingredient systems fossilized over time through cultural evolution, as well as the electric ingenuity of modern innovators and chefs,” the team wrote.

Read the full paper in Scientific Reports, and find the data and trained food representations on GitHub.