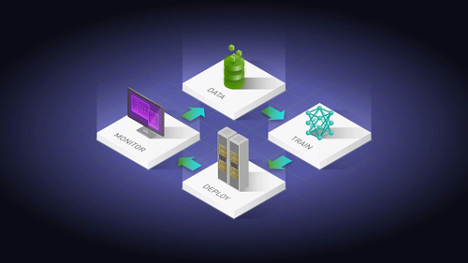 With the continued growth of AI models and data sets and the rise of real-time applications, getting optimal inference performance has never been more important. In this post, you learn how to get the best natural language inference performance from AWS G4dn instance powered by NVIDIA T4 GPUs, and how to deploy BERT networks easily using NVIDIA Triton Inference Server.

As the explosive growth of AI models continues unabated, natural language processing and understanding are at the forefront of this growth. As the industry heads toward trillion-parameter models and beyond, acceleration for AI inference is now a must-have.

Many organizations deploy these services in the cloud and seek to get optimal performance and utility out of every instance they rent. Instances like the AWS G4dn, powered by NVIDIA T4 GPUs, is a great platform for delivering AI inference to cutting-edge applications. The combination of Tensor Core technology, TensorRT, INT8 precision, and NVIDIA Triton Inference Server team up to get the best inference performance from AWS.

For starters, here are the dollars and cents. Running BERT-based networks, AWS customers can get a million sentences inferenced for about a dime. Using BERT Large, which is about three times larger than BERT Base, you can get a million sentences inferenced for around 30 cents. The efficiency of the T4 GPU that powers the AWS g4dn.xlarge instance means you can cost effectively deploy smart, powerful natural language applications to attract new customers, and deliver great experiences to existing customers.

Deploying inference-powered applications is still sometimes harder than it must be. To that end, we created NVIDIA Triton Inference Server. This open-source server software eases deployment, with automatic load balancing, automatic scaling, and dynamic batching. This last feature is especially useful as many natural language AI applications must operate in real time.

Currently, NVIDIA Triton supports a variety of major AI frameworks, including TensorFlow, TensorRT, PyTorch, and ONNX. You can also implement your own custom inference workload by using the Python and C++ custom backend.

With the new feature introduced in the NVIDIA Triton tools model analyzer, you can set a latency budget of five milliseconds. NVIDIA Triton automatically sets the optimal batch size for best throughput while maintaining that latency budget. In addition, NVIDIA Triton is tightly coupled with Kubernetes. It can be used with cloud provider-managed Kubernetes services like Amazon EKS, Google Kubernetes Engine, and Azure Kubernetes Service.

Because language models are often used in real-time applications, we discuss performance at several latency targets, specifically 5ms and 10ms. To simulate a real-world application, assume that there are multiple end users all sending inference requests with a batch size of one simultaneously. What’s of interest is how many requests can be handled per second.

For these measurements on G4dn, we used NVIDIA Triton to serve the BERT QA model with a sequence length of 128 and precision of INT8. Using INT8 precision, we saw up to an 80% performance improvement compared to FP16, which translates into more simultaneous requests at any given latency requirement.

Much higher throughput can be obtained with the NVIDIA Triton optimizations of concurrent model execution and dynamic batching. You can also make use of the model analyzer tool to help you find the optimal configurations to maximize the throughput under the required latency of 5 ms and 10 ms.

For BERT Base, you can see that T4 can get nearly 1,800 sentences/sec within a 10ms latency budget. T4 very quickly achieves its maximum throughput, and so the real-time throughput is about the same as the high batch throughput. This performance means that a single T4 GPU can simultaneously deliver answers to nearly 1,800 simultaneous requests and deliver a million of these answers for less than a dime, making it a cost-effective solution.

BERT-Large is about three times larger than BERT-Base and can deliver more accurate and refined answers. With this model, T4 on G4dn can deliver 449 samples per second within the 10ms latency limit, and 525 sentences/sec for batch throughput. In terms of cost per million inferences, this translates into an instance cost of 33 cents for real-time and 28 cents for batch throughput, again delivering great performance/dollar.

TensorRT maximizes throughput by quantizing models to INT8 while preserving accuracy, and automatically selects best data layers and algorithms that are optimized for the target GPU platform.

TensorRT and NVIDIA Triton Inference Server software are both available from NGC Catalog, the curated set of NVIDIA GPU-optimized software for AI, HPC, and visualization. The NGC Catalog consists of containers, pretrained models, Helm charts for Kubernetes deployments, and industry-specific AI toolkits with SDKs. TensorRT and NVIDIA Triton are also both available in the NGC Catalog in AWS Marketplace, making it even easier to use these resources on AWS G4 instances.

AWS offers the G4dn Instance based on NVIDIA T4 GPUs, and describes G4dn as “the lowest cost GPU-based instances in the cloud for machine learning inference and small scale training.”

Amazon EC2 offers a variety of G4 instances with one or multiple GPUs, and with different amounts of vCPU and memory. You can perform BERT inference below 5 ms on a single T4 GPU with 16 GB, such as on a g4dn.xlarge instance. The cost of this instance at the time of publication is $0.526 per hour on demand in the US East (N. Virginia) Region

Here’s how to get the most performance from the popular language model BERT, a transformer-based model introduced by Google a few years ago. We discuss performance for both BERT-Base and BERT-Large and then walk through how to set up NVIDIA Triton to perform inferences on both models.

To experience the outstanding performance shown earlier, follow the detailed steps in the TensorRT demo. To save all the efforts needed for complicated environment setup and configuring, you can start directly with updated monthly, performance-optimized containers available on NGC.

Launch an EC2 instance. Select the Deep Learning AMI (Ubuntu 18.04) version 43.0 to run on a g4dn.xlarge instance with at least 150G of storage space. Log into your instance.

Pull and launch the container:

Change to the BERT directory:

Download TensorFlow checkpoints for BERT base model with sequence length 128, fine-tuned for SQuAD v2.0. It takes few minutes to download the model.

Install related packages and Build the TensorRT engine. To build an engine, follow these steps. Install the required package:

Create a directory to store the engines:

Run the builder.py script to build the engine with FP16 precision:

Run the builder.py script to build the engine with INT8 precision to obtain the best performance, as shown earlier:

Test and benchmark the TensorRT engine that you just created. For benchmarking the model generated at 5.c, run the following command:

For benchmarking the model generated at 5.d, run the following command:

In this section, we show you how to deploy the TensorRT model with NVIDIA Triton Inference Server and turn on concurrent model execution. We also demonstrate dynamic batching with only a few lines of code. Follow these steps on the g4dn.xlarge instance launched earlier.

In the first step, you regenerate the model files with a larger batch size to enable NVIDIA Triton dynamic batching optimizations. This is supposed to run in the same container as the one in previous sections.

Regenerate the TensorRT engine files with a larger batch size:

Exit the current Docker environment and create a directory for triton_serving by running the following commands:

You can change the bert_base_128_int8mix.engine to other engine files that you would like to serve on NVIDIA Triton.

It should be in the following format if everything works correctly:

In this format, triton_serving is the model repository containing all your models, bert_base_qa is the model name, and 1 is the version number.

If you don’t know what to put into the config.pbtxt file yet, you may use the --strict-model-config False flag to let NVIDIA Triton serve the model with an automatically generated configuration.

In addition to the default configuration automatically generated by the NVIDIA Triton server, we recommend finding an optimal configuration based on the actual workload that users need. Download our example config.pbtxt file.

As you can see from the config.pbtxt file, you only need four lines of code to enable dynamic batching:

Here, the preferred_batch_size option means the preferred batch size that you would like to combine your input requests into. The max_queue_delay_microseconds option is how long the NVIDIA Triton server waits when the preferred size cannot be created from the available requests.

For concurrent model execution, directly specify the model concurrency per GPU by changing the count number in the instance_group.

For more information about the configuration files, see Model Configuration.

Start the NVIDIA Triton server by running the following command:

The --strict-model-config False is only needed if you are not including the config.pbtxt file in your NVIDIA Triton server directory.

With that, congratulations on having your first NVIDIA Triton server running! Feel free to use the HTTP and grpc protocols to send your request or use the Performance Analyzer tool to test the server performance.

For the following benchmark, you use the perf_analyzer application to generate concurrent inference requests and measure the throughput and latency of those requests. By default, perf_analyzer sends requests with concurrency number 1 and batch size 1. The whole process works as follows:

While the NVIDIA Triton server from the previous step is still running, open a new terminal, connect using SSH to the instance that you were running, and run the NGC NVIDIA Triton SDK container:

Generate a real input file with the format required. For an easy start, you can also directly download one example available input.json.

Run the perf analyzer with the following command:

The preceding command sends the request with request concurrency 8 and batch size 1 to the NVIDIA Triton server.

Tables 2 and 3 show the inference throughput and latency results.

Table 3 shows that NVIDIA Triton can provide higher throughput with the concurrent model execution and dynamic batching features compared to the baseline without these optimizations on the same infrastructure.

With dynamic batching and concurrent model execution enabled, you can do inference for BERT-Large:

To summarize, you converted a fine-tuned BERT model for QA tasks into a TensorRT engine, which is highly optimized for inference. The optimized BERT QA engine was then deployed on NVIDIA Triton Inference Server, with concurrent model execution and dynamic batching to get the best performance from NVIDIA T4 GPUs.

Be sure to visit NGC, where you can find GPU-optimized AI, high-performance computing (HPC), and data analytics applications, as well as enterprise-grade containers, pretrained AI models, and industry-specific SDKs to aid in the development of your own workload. Also, stay tuned for the upcoming TensorRT 8, which includes new features like sparsity optimization for NVIDIA Ampere Architecture GPUs, quantization-aware training, and an enhanced compiler to accelerate transformer-based networks.