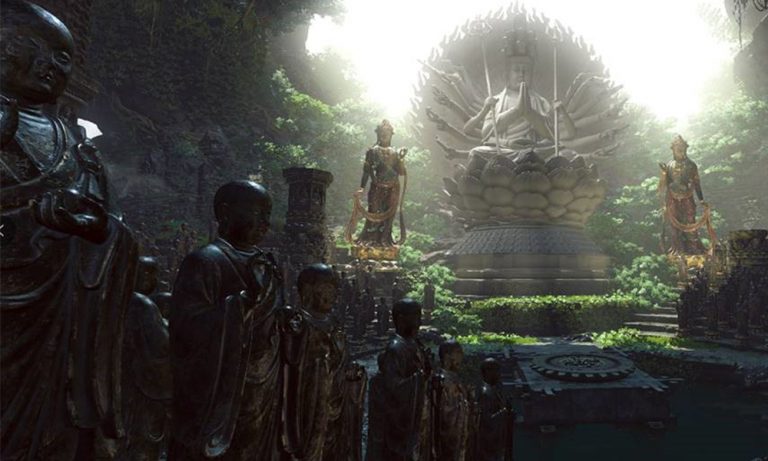 In December, we interviewed Haiyong Qian, NetEase Game Engine Development Researcher and Manager of NetEase Thunder Fire Games Technical Center, to see what he’s learned as the Justice team added NVIDIA ray-tracing solutions to their development pipeline. Their results were nothing short of stunning with local 8K DLSS support and global illumination through RTXGI.

Recently, NetEase introduced Mesh Shader support to Justice. Not only are the updated environments breathtaking, the game supports 1.8 billion triangles running over 60 FPS in 4K on an NVIDIA 3060Ti.

To learn more about the implementation and results, we sat down with Yuheng Zou, game engine developer at NetEase. His work focuses on the rendering engine in Justice, specifically GPU features enabled by DirectX 12.

Q: What are you trying to achieve by adding mesh shading to Justice?

Our first thought is to render some highly detailed models which may need insane number of triangles. Soon we found we can combine Mesh Shaders with auto-generated LODs to achieve almost only-resolution-relevant rendering complexity, instead of polygon number. And we decided to try it out. With so much potential of Mesh Shader, we conceive that it would be the main stream of future games.

Q: What is not currently working with regular compute / draw indirect / traditional methods?

The simple draw call just doesn’t work for this. It lacks the ability to process mesh in a coarser grain than triangle, like meshlet culling.

Compute or draw indirect may be fine, but we do need to make a huge change on the rendering pipeline. The underlying idea of the algorithm is, in the first place, to do culling, then draw the effective parts of mesh. While it can be achieved by culling and compacting with compute shader and then drawing indirect, the data exchange between the two-step process can sometimes be fatal to GPU under highpoly rendering context. Mesh shader solves this problem from the hardware level.

Q: How do Mesh Shaders solve this?

Mesh shader can extend the scalability of geometry stage, and is very easy to integrate to engine runtime. It has the ability to encapsulate the culling procedure in a single API call, which omits tedious state and resource set up procedure as draw indirect requires. With MeshShaders, the culling algorithms we use can be of great flexibility. For example, in the shadow pass, we don’t have the depth information so occlusion culling is simply ignored in the shader.

Q: Is the end result of adding Mesh Shaders something your players will quickly notice, or is the effect more subtle?

Our technology customizes a highpoly mesh pipeline, including production, processing, serialization, streaming and rendering, aiming to provide our players with a refreshed experience with such high-fidelity contents. Actually, it works. Soon after “Wan Fo Ku” released, our players found the models presented were much more elaborate than the traditional one, with many close-up screenshots posted on the forums. While adding Mesh Shaders under customized highpoly scene do boost the rendering effectiveness, how to optimize our traditional scene remains subtle and needs more engineering efforts.

Q: What kinds of environments benefited most from the technology?

Our technology enables the ability of rendering parallax and silhouette of models in an incredible fidelity. For scenes like caves, these details can produce a visually better image. It also provides Chinese ancient buildings, furniture and ornaments with “meticulous” rendering result, which enables the culture carried by them to be expressed in Justice to the finest extent.

Q: What is the one thing you wish you knew before you added mesh shading? What would you do differently based on your learnings?

With such detailed models, large texture resolution is a must. We will pay more attention to texture loading or streaming. This also makes further requirements to our mesh/texture compression algorithms.

Q: Any other tips for developers looking to work with Mesh Shaders for the first time?

Mesh shader has the possibility of boosting geometry stage drastically. However, careful profiling and optimization is required. We highly recommend NSight for debugging and profiling Mesh Shaders.

Since 2016, Justice has been closely engaged with NVIDIA in China on video game graphics technology innovation. As one of the best PC MMO games in China market, Justice has attracted thirty millions of players in the past three years with its excellent technologies and beautiful graphics.