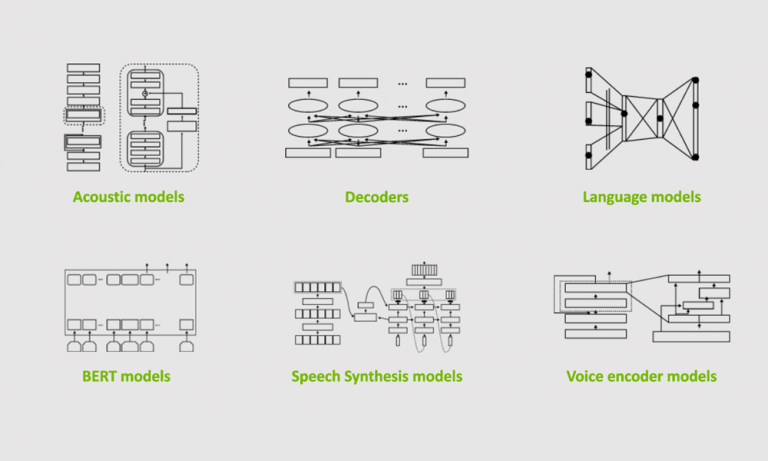 NVIDIA NeMo is a conversational AI toolkit built for researchers working on automatic speech recognition (ASR), natural language processing (NLP), and text-to-speech synthesis (TTS). The primary objective of NeMo is to help researchers from industry and academia to reuse prior work (code and pretrained models and make it easier to create new conversational AI models. … Continued

NVIDIA NeMo is a conversational AI toolkit built for researchers working on automatic speech recognition (ASR), natural language processing (NLP), and text-to-speech synthesis (TTS). The primary objective of NeMo is to help researchers from industry and academia to reuse prior work (code and pretrained models and make it easier to create new conversational AI models. NeMo is an open-source project, and we welcome contributions from the research community.

The 1.0 update brings significant architectural, code quality, and documentation improvements as well as a plethora of new state-of-the-art neural networks and pretrained checkpoints in several languages. The best way to start with NeMo is by installing it in your regular PyTorch environment:

NeMo is a PyTorch ecosystem project that relies heavily on two other projects from the ecosystem: PyTorch Lightning for training and Hydra for configuration management. You can also use NeMo models and modules within any PyTorch code.

NeMo comes with three main collections: ASR, NLP, and TTS. They are collections of models and modules that are ready to be reused in your conversational AI experiments. Most importantly, for most of the models, we provide weights pretrained on various datasets using tens of thousands of GPU hours.

The NeMo ASR collection is the most extensive collection with a lot to offer for researchers of all levels, from beginners to advanced. If you are new to deep learning for speech recognition, we recommend that you get started with an interactive notebook for both ASR and NeMo overview. If you are an experienced researcher looking to create your own model, you’ll find various ready-to-use building blocks:

The NeMo ASR collection provides you with various types of ASR networks: Jasper, QuartzNet, CitriNet, and Conformer. With the NeMo 1.0 update, the CitriNet and Conformer models are the next flagship ASR models providing better accuracy on word-error-rate (WER) than Jasper and QuartzNet while maintaining similar or better efficiency.

Conformer-CTC is a CTC-based variant of the Conformer model that uses CTC loss and decoding instead of RNN-T loss, making it a nonautoregressive model. This model combines self-attention and convolution modules to achieve the best of both worlds. The self-attention modules can learn the global interaction while the convolutions efficiently capture the local correlations.

This model gives you an option to experiment with attention-based models. Due to the global context obtained by self-attention and squeeze-and-excitation mechanism, Conformer and CitriNet models have superior WER in offline scenarios.

You can use Citrinet and Conformer models with CTC as well as RNN-T decoders.

We spent tens of thousands of GPU hours training ASR models in various languages. In NeMo, we offer these checkpoints back to the community for free. As of this release, NeMo has ASR models in English, Spanish, Chinese, Catalonian, Italian, Russian, French, and Polish. Moreover, we partner with Mozilla to make more pretrained models available with the help of Mozilla Common Voice project.

NeMo is also integrated with models trained by NVIDIA Megatron, allowing you to incorporate Megatron-based encoders into your question answering and neural machine translation models. NeMo can be used to fine-tune model-parallel models based on Megatron.

In today’s globalized world, it has become important to communicate with people speaking different languages. A conversational AI system capable of converting source text from one language to another will be a powerful communication tool. NeMo 1.0 now supports neural machine translation (NMT) tasks with transformer-based models allowing you to quickly build an end-to-end language translation pipelines. This release includes pretrained NMT models for the following language pairs in both directions:

Because tokenization is an extremely important part of NLP and NeMo supports most widely used tokenizers, such as HF tokenizers, SentencePiece, and YouTokenToMe.

If humans can talk to computers, the computers should be able to talk back as well. Speech synthesis takes text as an input and generates humanized audio output. This is typically accomplished with two models: a spectrogram generator that generates spectrograms from text and a vocoder that generates audio from spectrogram. The NeMo TTS collection provides you with the following models:

Here’s a simple example demonstrating how to use NeMo for prototyping a universal translator app. This app takes a Russian audio file and generates an English translation audio. You can play with it using the AudioTranslationSample.ipynb notebook.

The best part of this example is that you can fine-tune all the models used here on your datasets. In-domain fine-tuning is a great way to improve the performance of your models on specific applications. The NeMo GitHub repo provides plenty of fine-tuning examples.

NeMo models have a common look and feel, regardless of domain. They are configured, trained, and used in a similar fashion.

An ability to run experiments and quickly test new ideas is key to successful research. With NeMo, you can speed up training by using the latest NVIDIA Tensor Cores and model parallel training features across many nodes and hundreds of GPUs. Much of this functionality is provided with the help of the PyTorch Lightning trainer, which has an intuitive and easy-to-use API.

For speech recognition, language modeling, and machine translation, we provide high-performance web dataset-based data loaders. These data loaders can handle scaling to tens of thousands of hours of speech data to deliver high performance in massively distributed settings with thousands of GPUs.

NeMo 1.0 release substantially improves overall quality and documentation. It adds support for new tasks such as neural machine translation and many new models pretrained in different languages. As a mature tool for ASR and TTS, it also adds new features for text normalization and denormalization, dataset creation based on CTC-segmentation and speech data explorer. These updates benefit researchers in academia and industry by making it easier for you to develop and train new conversational AI models.

Many NeMo models can be exported to NVIDIA Jarvis for production deployment and high-performance inference. NVIDIA Jarvis is an application framework for building multimodal conversational AI services that delivers real-time performance on GPUs.

We welcome external contributions! On the NVIDIA NeMo GitHub page, you can try out the examples, participate in community discussions, and take your models from research to production using NeMo and NVIDIA Jarvis.