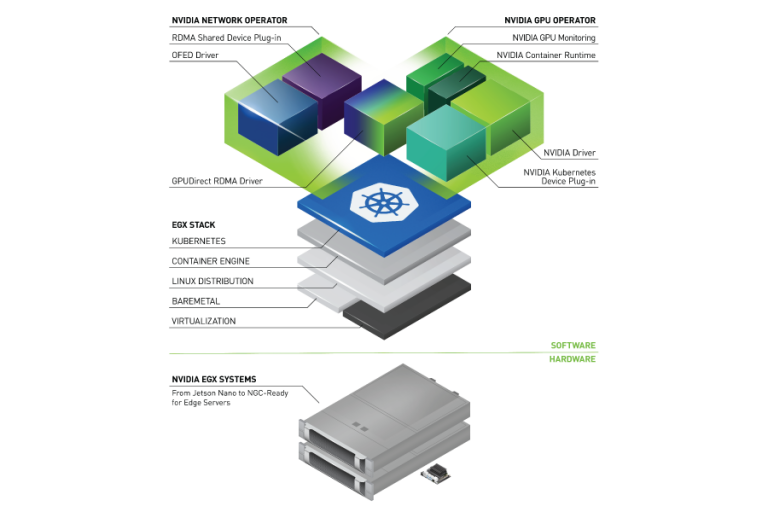 Reliably provisioning servers with GPUs in Kubernetes can quickly become complex as multiple components must be installed and managed to use GPUs. The GPU Operator, based on the Operator Framework, simplifies the initial deployment and management of GPU servers. NVIDIA, Red Hat, and others in the community have collaborated on creating the GPU Operator.

To provision GPU worker nodes in a Kubernetes cluster, the following NVIDIA software components are required:

These components should be provisioned before GPU resources are available to the cluster and managed during the cluster operation.

The GPU Operator simplifies both the initial deployment and management of the components by containerizing all components. It uses standard Kubernetes APIs for automating and managing these components, including versioning and upgrades. The GPU Operator is fully open source. It is available on NGC and as part of the NVIDIA EGX Stack and Red Hat OpenShift.

The latest GPU Operator releases, 1.6 and 1.7, include several new features:

Multi-Instance GPU (MIG) expands the performance and value of each NVIDIA A100 Tensor Core GPU. MIG can partition the A100 or A30 GPU into as many as seven instances (A100) or four instances (A30), each fully isolated with their own high-bandwidth memory, cache, and compute cores.

Without MIG, different jobs running on the same GPU, such as different AI inference requests, compete for the same resources, such as memory bandwidth. With MIG, jobs run simultaneously on different instances, each with dedicated resources for compute, memory, and memory bandwidth. This results in predictable performance with quality of service and maximum GPU utilization. Because simultaneous jobs can operate, MIG is ideal for edge computing use cases.

Install command with only the drivers preinstalled:

Install command with both drivers and nvidia-docker2 preinstalled:

We continue our line of support for Red Hat OpenShift,

We updated the GPU Driver version to include support for NVIDIA A40, A30, and A10.

The NVIDIA A40 delivers the data center-based solution that designers, engineers, artists, and scientists need for meeting today’s challenges. Built on the NVIDIA Ampere Architecture, the A40 combines the latest generation RT Cores, Tensor Cores, and CUDA Cores. It has 48 GB of graphics memory for unprecedented graphics, rendering, compute, and AI performance. From powerful virtual workstations accessible from anywhere, to dedicated render and compute nodes, the A40 is built to tackle the most demanding visual computing workloads from the data center.

For more information, see NVIDIA A40.

The NVIDIA A30 Tensor Core GPU is the most versatile mainstream compute GPU for AI inference and enterprise workloads. Tensor Cores with MIG combine with fast memory bandwidth in a low 165W power envelope, all in a PCIe form factor ideal for mainstream servers.

For more information, see NVIDIA A30.

The NVIDIA A10 Tensor Core GPU is the ideal GPU for mainstream media and graphics with AI. Second-generation RT Cores and third-generation Tensor Cores enrich graphics and video applications with powerful AI. NVIDIA A10 delivers a single-wide, full-height, full-length PCIe form factor and a 150W power envelope for dense servers.

Built for graphics, media, and cloud gaming applications with powerful AI capabilities, the NVIDIA A10 Tensor Core GPU can deliver rich media experiences. It delivers up to 4k for cloud gaming, with 2.5x the graphics and over 3x the inference performance compared to the NVIDIA T4 Tensor Core GPU.

For more information, see NVIDIA A10.