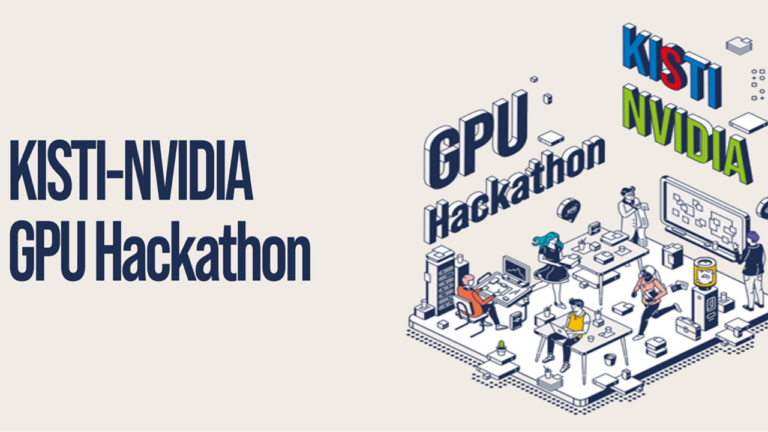 Due to the coronavirus, the 2021 Korea Institute of Science and Technology Information (KISTI) GPU Hackathon was held virtually, under the guidance of expert mentors from KISTI, NVIDIA, and the OpenACC Organization. With the goal of inspiring possibilities for scientists to accelerate their AI research or HPC codes, the hackathon provided opportunities for solving research problems and expanding expertise using NVIDIA GPU parallel computing technology.

Known for being a face-to-face event, a virtual hackathon poses its own challenges for both attendees and hosts. The new format also required juggling a diversity of teams—composed of three HPC and AI teams, four higher education and research teams, and two industry teams.

The event team found the following recipe helped create a meaningful and successful experience for the participants:

Based on their expertise in specific domains or programming languages, dedicated mentors were paired with teams for guidance in setting goals, and considering different approaches. The mentors collaboratively worked to solve problems and troubleshoot obstacles the teams encountered. Daily mentor sync-up calls each day kept everyone focused and working toward the best strategy for meeting their goals.

Everyone knows that all work and no play can actually hinder a team’s productivity. The hackathon provided a TGIF social hour session for participants and mentors. Using the Metaverse Gather Town Space, mentors and teams shared experiences, recharged their batteries, and developed connections that helped them continue forward for the duration of the event.

The PasCal team from Yonsei University is developing a thermal fluid solver that efficiently calculates the thermal motion of turbulence. At this hackathon, the team converted existing code based on CPUs to a multi-GPU environment through OpenACC and cuFFT Library. This resulted in accelerating the calculations by 4.84 times RHS (right-hand side, fraction step) of one of most time consuming subroutines.

The Amore Opt team from AmorePacific cosmetics company worked on GPU optimization of DeepLabV3 + segmentation model. By applying what they learned about the TensorRT Inference optimizer and NVIDIA Triton inference server, they improved inference speed making it 26 times faster. They did this while maintaining the accuracy in their AI models to detect skin problems for their future large-scale customer service.