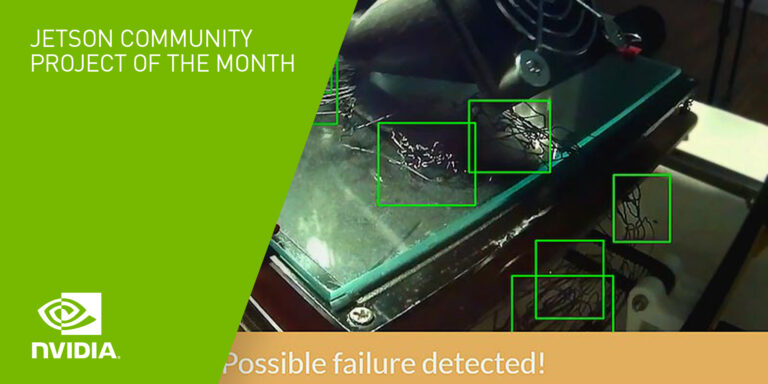 3D printing can be a quick and convenient way to prototype ideas and build useful everyday objects. But it can also be messy—and stressful—when a print job encounters an error that leaves your masterpiece buried in piles of plastic filament. Those tangles of twisted goop are known as “spaghetti monsters,” and they have the power to kill your project and raise your blood pressure.

Thankfully, there is a way to tame these monsters. Meet The Spaghetti Detective (TSD), an AI-based (deep learning) failure-detection tool for 3D printer remote management and monitoring. In other words, with TSD you can detect spaghetti monsters before they get out of hand. It issues an early warning that could save days of work and pounds and pounds of filament.

In fact, according to the team behind TSD, the tool has caught more than 560,000 failed prints by watching more than 47 million hours of 3D project printing time, saving more than 27,500 pounds of filament.

Kenneth Jiang, founder of TSD, reported being “stunned” at just how outdated most 3D-printing software can be. So he and his team created TSD to bring new technologies to the world of 3D printing.

Every part of TSD is open source, including the plug-in, the backend, and the algorithm.

According to a post by Jiang in the NVIDIA Developer Forum, TSD is “based on a Convolutional Neural Network architecture called YOLO. It is essentially a super-fast objection-detection model.”

The Spaghetti Detective also communicates with OctoPrint, an open-source web interface for your 3D printer. The private TSD server has an array of advanced settings for all requirements, including enabling NVIDIA GPU acceleration, reverse proxies, NGINX settings, and more.

With more than 600 stars on GitHub, TSD is being used by hundreds of NVIDIA Jetson Nano fans who are also 3D printing enthusiasts. Inspired by their success, Jiang took it upon himself to set up TSD with Jetson Nano, and created a demo to show other users how to set it up.

The project requires an NVIDIA Jetson Nano with 4GB of memory to run (they do not advise trying to set this up with the 2GB model), an Ethernet cable to connect your network router, an HDMI cable, keyboard, and mouse. TSD is installed using Docker and Docker-compose, and the server uses e-mail delivery through SMTP for notifications. The web interface is written in Django and you can log in and create a password-secured account. Notifications from TSD can also be sent by SMS.

TSD is available as a free service for occasional 3D-print monitoring. If you expect to be printing daily, there is also a paid option starting at $4 per month.

The team working on TSD also plans to add event-based recording for fluid video capture, improvements to model accuracy and capability, and functionality to enable local hosting for increased data privacy. At the same time, they are clearly having fun figuring it all out, as you can see from their very popular videos on TikTok.

If you are interested in learning more about how Jetson Nano can be used to run The Spaghetti Detective, check out the code in GitHub.