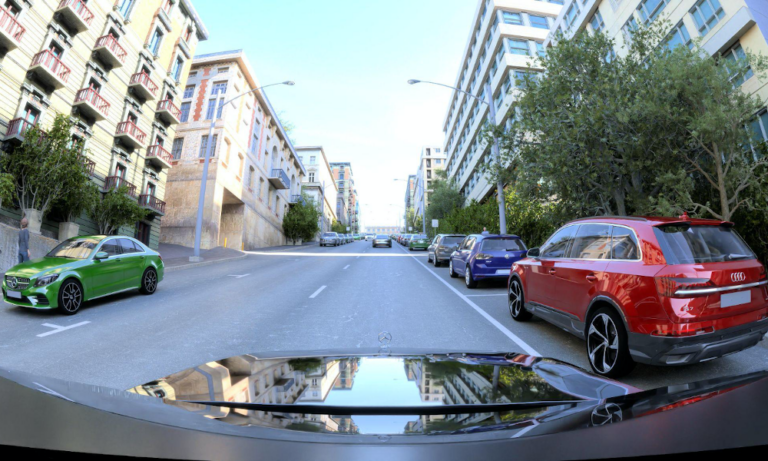 This post covers the validation of camera models in DRIVE Sim, assessing the performance elements, from rendering of the world scene to protocol simulation.

Autonomous vehicles require large-scale development and testing in a wide range of scenarios before they can be deployed.

Simulation can address these challenges by delivering scalable, repeatable environments for autonomous vehicles to encounter the rare and dangerous scenarios necessary for training, testing, and validation.

NVIDIA DRIVE Sim on Omniverse is a simulation platform purpose-built for development and testing of autonomous vehicles (AV). It provides a high-fidelity digital twin of the vehicle, the 3D environment, and the sensors needed for the development and validation of AV systems.

Unlike virtual worlds for other applications such as video games, DRIVE Sim must generate data that accurately models the real-world. Using simulation in an engineering toolchain requires a clear grasp of the simulator’s performance and limitations.

This accuracy covers all of the functions modeled by the simulator including vehicle dynamics, vehicle components, behavior of other drivers and pedestrians, and the vehicle’s sensors. This post covers part of the validation of camera models in DRIVE Sim, which requires assessing the individual performance of each element, from rendering of the world scene to protocol simulation.

A thorough validation of a simulated camera can be performed with two methodologies:

Individual component analysis is a complex topic. This post describes our component-level validation of two critical properties of the camera model: camera calibration (extrinsic and intrinsic parameters) and color accuracy. Direct comparisons are made with real world camera data to identify any delta between simulated and real world images.

For this validation, we chose to use a set of camera models from the NVIDIA DRIVE Hyperion sensor suite. Figure 2 details the camera models used throughout testing.

AV perception requires a precise understanding of where the cameras are positioned on the vehicle and how each unique lens geometry of a camera affects the images it produces. The AV system processes these parameters through camera calibration.

We use NVIDIA Driveworks, our sensor calibration interface, to estimate all camera parameters mentioned in this post.

Validation of camera characteristics can be done in these steps:

Intrinsic camera calibration describes the unique geometry of an individual lens more precisely than its manufacturing tolerance by setting coefficients of a polynomial.

The calibration of this polynomial enables an AV to make better inferences from camera data by characterizing the effects of lens distortion. The difference between two lens models can be quantified by calculating the max theta distortion between them.

We validate the intrinsic calibration of our simulated cameras according to the following process:

The max theta distortion for each camera derived by comparing its real f-theta lens calibration to the calibration yielded from simulated images.

This first result exceeded our expectations as the simulation is behaving predictably and reproducing the observed outcomes from real-world calibrations.

This comparison provides a first degree of confidence in the ability of our model to accurately represent lens distortion effects because we observe a small discrepancy between real and simulated cameras. The front telephoto lens is difficult to constrain in real life, hence we expected it to be an outlier in our simulation results.

Another way to look at these results is by considering the effect of the distortions on the generated images. We compare the real and simulated detected features from the calibration charts in a later step, described under the Numerical Feature Marker comparison.

We proceed with the extrinsic validation method.

We validate the extrinsic calibration of our simulated cameras according to the following process:

All positions and orientations are given with regard to a right-handed reference coordinate system with origin at the center of the rear axle of the car projected onto the ground plane, where x aligns with the direction of the car, y to the left, and z up. Yaw, pitch, and roll are counter-clockwise rotations around z, y, and x.

The validation previously described compares real lab calibrations to digital twins’ calibrations in DRIVE Sim RTX renderer. The RTX renderer is a path-tracing renderer that provides two rendering modes, a real-time mode and a reference mode (not real-time, focus on accuracy) to provide full flexibility depending on the specific use case.

This full validation process was done with digital twins rendered in both RTX real-time and reference modes to evaluate the effect of reduced processing power allocated to rendering. See a summary of the real-time validation results in the following table, with reference results available for comparison.

As expected, there was a slight increase in real-to-sim error for most measurements when rendering in real-time due to reduced image quality. Nonetheless, calibration based on real-time images matched lab calibrations within 0.030 meters and 0.041 degrees for cameras, 0.041 meters and 0.010 degrees for AprilTag locations, and 0.49% of theoretical field of view for the lens models.

There is currently no standard to define an acceptable error under which a sensor simulation model can be deemed viable. Thus, we compare our position and orientation delta values to the calibration error yielded by real-world calibrations to define a valid criterion for the maximum acceptable error for our simulation. The resulting errors from our tests are consistently smaller than the calibration error observed in the real world.

This calibration method is based on statistical optimization techniques used by our calibration tool and hence can introduce its own uncertainty.  However, it is also important to note that the DriveWorks calibration system has been consistently used in research and development for sensor calibration with a high degree of accuracy.

These results also demonstrate that the calibration tool can function with simulation-rendered images and provide comparable results with the real world. The fact that the real-world calibration system and our simulation are in agreement is a first significant indicator of confidence for our camera simulation model.

Moreover, this method also validates the simulator as a whole, because the digital twin used for calibration models the scene in its entirety with all 12 cameras, without tweaking values to improve results.

To assess further the validity of this method, we then run a direct numerical feature marker comparison between the real and simulated images.

The calibration tool provides a visual validator to reproject the calibration charts positions onto the input images based on the estimated intrinsic parameters. The images show an example of the overlay of the detected features and the reprojection statistics (mean, std, min, and max reprojection error) for the simulated and real camera.

Computing the reprojection error enables us to assert further the validity of the prior calibration method. This approach parses the calibration tool’s detected features and compares them to the ones in the real image.

Here we consider the corners of each of the AprilTags in the calibration charts as the feature markers. We calculate the distance in pixels between the feature markers detected on real images compared to synthetic images, both for path-traced and real-time simulation.

The following figure shows an average distance of 1.4 pixels between reference path-traced simulated and real feature markers. The same comparison based on the real-time simulated dataset yields an average reprojection error of 1.62 pixels.

Both values are the real-world projection error threshold of 2 pixels used to evaluate the accuracy of the real-world calibrations. The results are very promising, in particular because this method is less dependent on the inner workings of our calibration tool.

In fact, the calibration tool is only used here to estimate the detected feature markers in each image. The comparison of the markers is done based on a purely algorithmic analysis of objects in 3D space.

The camera calibration results demonstrate pixel correspondence of images produced by our camera sensor model to their real image counterparts. The next step is to validate that the values associated with each of those pixels are accurate.

We simulated a Macbeth ColorChecker chart and captured an image of it in DRIVE Sim to validate image quality. The RGB values of each color patch were then compared to those of the corresponding real image.

In addition to the real images, we also introduced the Iray renderer, NVIDIA’s most realistic physical light simulator, validated against CIE 171:2006. We performed this test first using simulated images generated with the Iray rendering system, then with NVIDIA RTX renderer. The comparison with Iray gives a good measure of the capability of the RTX renderer against a recognized industry gold standard.

We validate the image quality of our simulated cameras according to the following process:

The graphs show the normalized luma and RGB output for each color patch in the rendered and real images.

Both the luma and RGB values for our rendered images are close to the real camera, which gives confidence in the ability of our sensor model to reproduce color and brightness contributions accurately.

For a direct visual comparison, we show the stitched white-balanced RGB values of the Macbeth chart real and synthetic images (Iray, real-time, and path-traced contributions).

We also compute ΔE (see results in Figure 22), a CIE2000 computer vision metric, which quantifies the distance between the rendered and original camera values and is often used for camera characterization. A lower ΔE value indicates greater color accuracy and the human eye cannot detect a value under 1.

While ΔE provides a good measure of perceptual color difference and is recognized as an imaging standard, it is limited to human perception. The impact of such a metric on a neural network will remain to be evaluated in further tests.

This confirms that the DRIVE Sim camera model can reproduce the previously mentioned parameters of a real-world camera in a simulated environment at least as accurately as a twin camera setup in the real world. More importantly, these tests provide confidence to users that the outputs of the camera models, as far as intrinsics, extrinsics, and color reproduction, will be accurate and can serve as a foundation for other validation work to come.

The next steps will be to validate our model in the context of its real-world perception use cases and provide further results on imaging KPIs for the model in open-loop.