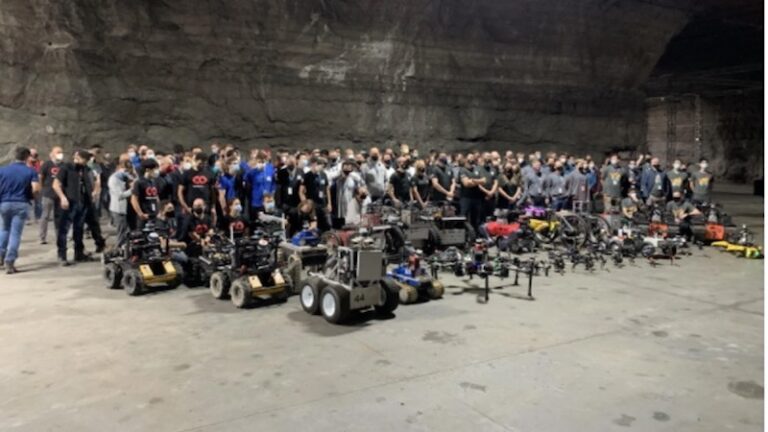 With NVIDIA Jetson embedded platforms, teams at the DARPA SubT Challenge detected objects with both high accuracy and high throughput.

Performing real-time inference with high accuracy is a challenging task, especially in a poor-visibility environment. With NVIDIA Jetson embedded platforms, teams at the recently concluded Defense Advanced Research Projects Agency (DARPA) Subterranean (SubT) Challenge were able to detect objects of interest with both high accuracy and high throughput. In this post, we will cover the results, systems, and challenges faced by teams in the final leg of the systems competition.

The SubT Challenge is an international robotics competition organized and coordinated by DARPA. The competition encourages researchers to develop new approaches for robots to map, navigate, and search environments that pose various challenges such as poor visibility, presence of hazards, unknown maps, or poor communication infrastructure.

The challenge consists of three preliminary circuit events: Tunnel Circuit, Urban Circuit, and Cave Circuit (canceled due to the COVID-19 pandemic), as well as a final integrated challenge course. Each circuit and the final event are held in different environments with various types of terrain. According to the event organizers, the competition was held over 3 years in different phases with the final event held in September of 2021 in Louisville, KY.

Competitors in the SubT Challenge leveraged NVIDIA technology for both their hardware and software needs. Teams used desktop/server GPUs to train models that were deployed on robots using NVIDIA Jetson embedded platform for real-time detection of artifacts and objects of interest–the main criteria used to determine the winning team. Five out of seven competitors also used the Jetson platform to perform real-time object detection.

The SubT Challenge is inspired by real-world scenarios faced by first responders during search and rescue operations or disaster response.

The state-of-the-art methods developed through this competition will help reduce the risk of casualties of search and rescue personnel and first responders while they explore the unknown underground environments. Additionally, the autonomous robots will assist personnel in exploring the environment to find survivors, objects of interest, and access locations that are otherwise risky for humans.

The competition incorporates various technical challenges such as dealing with unknown, unstructured, and uneven terrain that some robots might not be able to maneuver easily.

These environments typically would not have any infrastructure for communication with the central command. From a perception perspective, these environments will have poor visibility where the robots must find artifacts and objects of interest.

The competing teams were tasked with addressing these challenges by developing novel sensor fusion methods as well as developing new or modifying existing robotic platforms with different capabilities to locate and detect objects of interest.

The team participated in the competition with four quadruped robots called ANYmal, five primarily in-house-built drones with variable size and payload capacity, and a rover robot in the form of Super Mega Bot. In the competition finals, the team ended up using four ANYmal robots and the Super Mega Bot for exploration and artifact detection.

The CERBERUS team used a modified version of the You Only Look Once (YOLO) model for object detection. The model was trained on 40,000 labeled images using two NVIDIA RTX 3090 GPUs.

The trained model was further optimized using TensorRT before being deployed on Jetson for real-time inference. The Jetson AGX Xavier was able to perform inference at a collective rate of 20 Hz. In the competition finals, the CERBERUS team was the first to detect 23 of the 40 artifacts located in the environment, clinching the number one spot.

Led by researchers at NASA’s Jet Propulsion Laboratory (JPL) in Southern California along with other universities and industrial collaborators, team Collaborative SubTerranean Autonomous Robots (Co-STAR) was the winner of the 2020 competition focused on exploring complex underground urban environments.

They also successfully participated in the 2021 competition in mixed artificial and natural environments, placing fifth. The Co-STAR team entered the competition with four Spots, four Husky robots, and two drones.

Following an unexpected hardware issue in the final run, the team ended up using one Spot and three Husky robots. Each robot was equipped with a CPU-based computer along with one NVIDIA Jetson AGX Xavier.

The models were trained using two on-premise NVIDIA A100 GPUs and an AWS instance that consisted of eight V100 GPUs. Before deploying the models on Jetson AGX Xavier, the team pruned the models using TensorRT.

Using this setup, team Co-STAR was able to perform inference at 28 Hz with RGB images received from five RealSense cameras and images received from one thermal camera. In the final run, the robots were able to detect all 13 artifacts present in the designated areas. The exploration time was limited due to the delayed deployment caused by unexpected hardware issues at the deployment site.