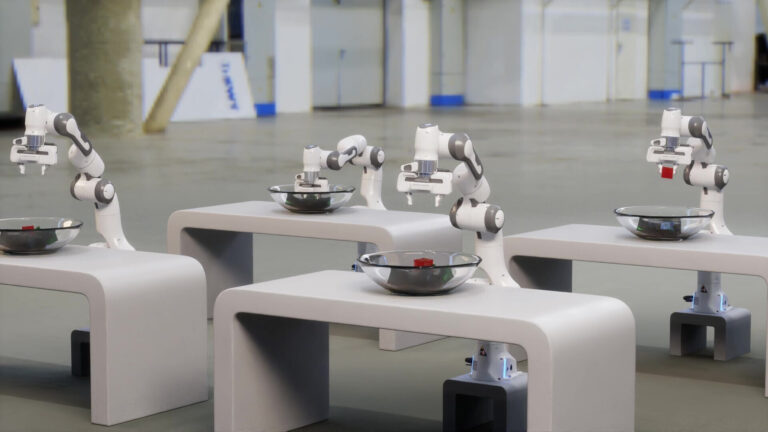 Learn about all of the new applications, features, and functions released for developers to build, extend, and connect 3D tools and platforms to the Omniverse ecosystem seamlessly.

Developers, creators, and enterprises around the world are using NVIDIA Omniverse—the real-time collaboration and simulation platform for 3D design—to enhance complex workflows and develop for 3D worlds faster. At NVIDIA GTC, we showcased how the platform’s ecosystem is expanding, from new Omniverse Connectors and asset libraries to updated Omniverse apps and features.

With these latest releases and capabilities, Omniverse developers can build, extend, and connect 3D tools and platforms to the Omniverse ecosystem more easily than ever before.

Omniverse Kit is a powerful toolkit on which Omniverse applications are built.

Omniverse Nucleus Workstation and Enterprise Nucleus Server were updated with a new navigator and several features requested from the community.

At GTC, we announced Omniverse Cloud, a suite of cloud services that provide instant access to the NVIDIA Omniverse platform. Omniverse Cloud encompasses several services, including Nucleus Cloud, now in early access, plus Omniverse Create and View apps streaming from the cloud.

With Omniverse Machinima, users can collaborate in real time to animate and manipulate characters and their virtual world environments.

New support for the Omniverse ecosystem provided by leading 3D marketplaces and digital asset libraries gives creators an even easier way to build their scenes. TurboSquid by Shutterstock, Sketchfab, Twinbru, and newly added Reallusion’s ActorCore assets are searchable directly inside the Omniverse App asset browser. Joining our catalog of Omniverse-ready assets alongside CGTrader is A23D, bringing 40,000 Omniverse-ready assets to users.

Join Omniverse Developer Days at GTC, which will showcase the many ways power users and developers can build extensions and apps on the platform. Hear from Omniverse engineering leaders and industry experts as they share new insights about 3D virtual world building, simulation, rendering, and more.

Learn more by diving into the Omniverse Resource Center, which details how developers can build custom applications and extensions for the platform.

For additional support, explore the Omniverse forums and Medium channel, tutorials on Twitter and YouTube, and join our Discord server to chat with the community.