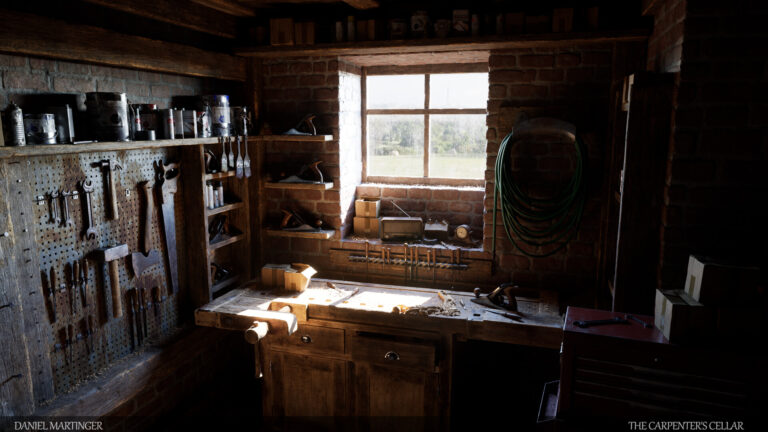 3D Artist Daniel Martinger discusses how he captured the attention of the computer graphics world with a path-traced rendered scene using an NVIDIA RTX 3090 and Unreal Engine 5.

NVIDIA was fortunate enough to speak with 3D prop and environment artist Daniel Martinger, who captured the attention of the computer graphics world with his stunningly realistic path-traced rendered scene entitled “The Carpenter’s Cellar.”

Below, Martinger discusses how he created this piece of work using an NVIDIA RTX 3090 and Unreal Engine 5, along with where he finds inspiration.

Where do you look for inspiration and ideas?
Martinger: Before I start a project, I really need to have a clear vision and an idea in my mind. I need to feel very excited to start the project. When I am outside, I often observe objects around me in nature and how lightning affects them. For example, during the day when I am outside or inside watching a movie—I get ideas of an environment and want to recreate it in 3D.

My ideas come from my surroundings. If I watch a movie and I see something cool that interests me like a messy room, I start to google reference photos of similar rooms. If I like the feeling of the room, there’s the possibility of combining that feeling with another theme. In this case I spent time searching for cellar reference photos like old cellars, just to get a feeling for the project.

Google and Pinterest are really nice sources. I gathered my references on a mood board. I usually have a lot of references just to combine them visually in my mind. In this project I really wanted daylight to spread throughout the room and explore Unreal Engine’s new lightning tech.

Why did you choose Unreal Engine 5 for this project?
Martinger: In school we learned another game engine, and I am always looking to learn and update my skills. I also saw a lot of videos about Unreal Engine 5 and was very impressed, so I decided to use Unreal Engines’ new tech to present my art.

I have leveraged NVIDIA GPUs since I was 15. When the [RTX] 3090 came out, it was like a 3D artist’s dream. The VRAM plays a big role here compared to other cards. You can never have enough VRAM as a 3D artist!

The power of the 3090 is amazing. Texturing programs and the game engine, it all just works, there’s been no lag or stuttering. My computer didn’t “complain” much, I can work with 8k textures without any problems.

Are you using one or two light sources in the path traced render?
Martinger: I wanted daylight to come into the room, so I used a skylight and a directional light as the sun source. I tweaked the settings to achieve the look I wanted, and yeah, path tracing just works. In real time you need to do a lot more work and tweaking to get a similar look as path tracing.

What are your biggest takeaways from this project?
Martinger: Keeping a realistic goal and timeline in mind is key. Do something you can deliver in a reasonable amount of time, and most importantly detailed planning to map out the approach, project flow, and process.

Stay tuned for updates from Daniel including a new project he’s currently working on, and for more artwork check out his ArtStation page. Learn more about NVIDIA resources for Unreal Engine developers.