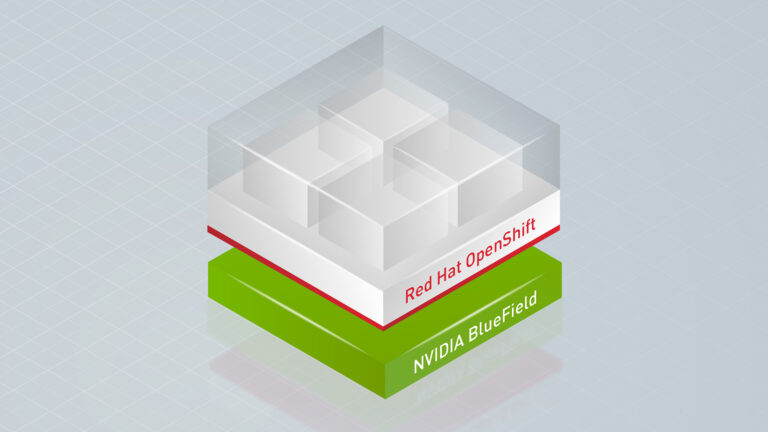 The IT world is moving to cloud, and cloud is built on containers managed with Kubernetes. We believe the next logical step is to accelerate this infrastructure with data processing units (DPUs) for greater performance, efficiency, and security.

Red Hat and NVIDIA are building an integrated cloud-ready infrastructure solution with the management and automation of Red Hat OpenShift combined with the acceleration, workload isolation, and security capabilities of NVIDIA BlueField DPUs.

Many popular cloud infrastructure projects use containers managed by Kubernetes. However, implementing Kubernetes can be a heavy lift, especially for organizations that cannot devote dedicated staff to becoming Kubernetes experts.

According to a 2021 Red Hat survey, Kubernetes is used for over 85% of container orchestration projects, and Red Hat OpenShift is the most popular choice for hybrid and multicloud Kubernetes deployments. OpenShift is the industry’s leading enterprise Kubernetes platform, used by more than 50% of commercial banks, telecommunications companies, and airlines on the Fortune 500.

It is clear that most enterprises want a supported Kubernetes model, and Red Hat OpenShift is one of the most popular choices.

How a DPU works

A DPU offloads, accelerates, and isolates infrastructure workloads from the server’s CPU. For example, the BlueField DPU can offload networking, network virtualization, data encryption, and time synchronization tasks from the CPU and run them on purpose-built silicon.

Other infrastructure software, such as remote management, firewall agents, network control plane, and storage virtualization, can run on BlueField’s Arm processor cores. Doing so frees up the server’s CPU cores that can instead run applications and tenant workloads.

This functionality also isolates infrastructure and security workloads in a separate domain. The result is a set of servers that run more applications with faster networking, increasing the efficiency and security of the data center.

In a typical cloud infrastructure, the network traffic traverses both physical servers and containers running on these servers. This requires a packet switching solution within each server, and to gain maximum efficiency, the application containers need a way to talk to the accelerated networking offloads of the DPU.

The traditional way is to go through Kubernetes and Open Virtual Network (OVN) to access the Open Virtual Switch (Open vSwitch or OVS). OVN provides network abstraction and the default deployment strategy is to run both OVN and OVS on the host server’s CPU.

However, this method consumes a significant number of CPU cores as the network speeds increase beyond 10 Gbps. A solution is needed for Kubernetes to run the OVN and OVS functionality on the DPU so that all the packet switching, header rewrites, encapsulation/decapsulation, and packet filtering can be done on networking hardware instead of in software on the CPU.

Red Hat and NVIDIA have collaborated to integrate the management power of OpenShift with the acceleration capabilities of the DPU.

The first stage of integration started in 2018 with Red Hat Enterprise Linux offloading network traffic to the NVIDIA ConnectX SmartNIC. The networking data plane–using OVS or DPDK–was running on the SmartNIC ASIC but the networking control plane was still running entirely in software on the X86 CPU.

In 2021, the companies took the next step and deployed Red Hat OpenShift with the NVIDIA BlueField DPU and ran performance benchmark tests. At NVIDIA GTC 2021, we demonstrated the advantages of shifting networking to the DPU and published a post, Optimizing server utilization in data centers by offloading network functions to NVIDIA BlueField-2 DPUs.

In the deployment scenario in Figure 2, the BlueField-2 does the heavy lifting in the following areas:

The host CPU and container see only simple unencapsulated, unencrypted packets and the CPU does not need to perform any of these tasks because they are offloaded to the DPU. This level of offload reduced CPU utilization by 70%, freeing up substantial CPU power on each server to run additional business/tenant workloads.

Running OpenShift on the DPU

As presented at GTC 2022, Red Hat and NVIDIA have taken the next step, moving OpenShift, including Red Hat Enterprise Linux CoreOS, to run on the Arm cores of the BlueField DPU for the Red Hat OpenShift two cluster design that includes separate tenant and infrastructure clusters.

Red Hat Enterprise Linux CoreOS is the supported operating system for the OpenShift control plane, or master and worker nodes. This is the portion of OpenShift that performs scheduling, maintenance, upgrades, and cluster automation. It includes container management tools and security hardening to make it more resistant to hackers, and it now runs on both the host x86 CPU and on the DPU Arm cores.

The cloud-native, software-defined networking is a good example of a BlueField DPU use case where OVN and OVS are running on and offloaded by the BlueField DPU in an OpenShift environment. Many other infrastructure services, such as network encryption, firewall agents, virtual routers, telemetry agents, and so on, can also be run on the DPU for an even greater benefit.

To understand the impact of the DPU offloads on reducing the data center costs, NVIDIA and Red Hat put together a TCO model for a mid-sized data center with 51K servers. We considered this data center to be supporting 1M applications, each application needing 10K packets per second (PPS) of switching performance.

We considered two server deployment scenarios: with and without a DPU:

Offloading virtual switching to the DPU also saved eight CPU cores per server. Based on this testing, the TCO model yielded amazing savings of $68.5M of CapEx. These savings are recognized by requiring 10K fewer DPU-enhanced servers due to much higher networking performance and CPU core savings per server.

We see power savings due to the smaller server footprint, which ultimately results in a better TCO model with the DPU-based servers. These TCO savings will get even better as we offload additional functions such as load balancers, firewalls, encryption, web servers, and so on to the DPUs, ultimately achieving amazing efficiency for cloud-ready data centers.

The two-cluster OpenShift architecture running OpenShift on BlueField is now available as a developer preview or early trial in OpenShift 4.10, and is expected to become generally available in 2022.

But the NVIDIA and Red Hat teams aren’t stopping here. We are planning to test the offloading of network traffic encryption/decryption as that is a CPU-intensive task.

Implementation of line-rate encryption offload from OpenShift to the DPU will improve data security for tenants and help you move closer to a zero-trust security stance.

BlueField-2 DPUs are available now from NVIDIA and the BlueField-3 DPU will start sampling later in 2022. In addition, BlueField DPUs will soon be available for testing in the NVIDIA LaunchPad cloud service.

If you would like to test or develop on Red Hat OpenShift running with the NVIDIA BlueField DPU, please indicate your interest.