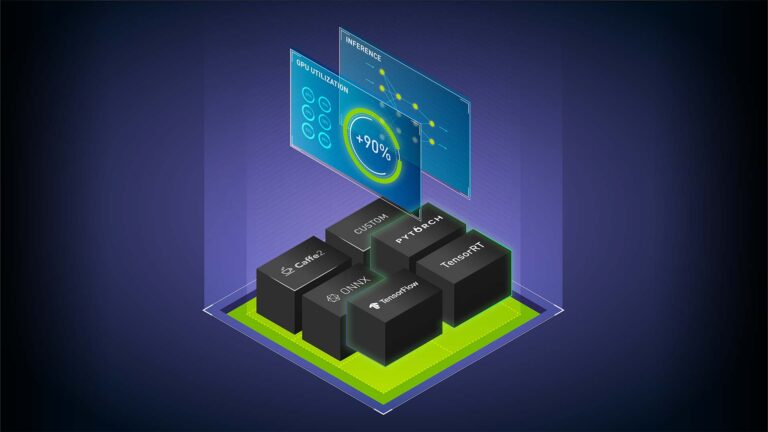 This post presents an overview of NVIDIA Triton Model Analyzer and how it can be used to find the optimal AI model-serving configuration to satisfy application requirements.

Model deployment is a key phase of the machine learning lifecycle where a trained model is integrated into the existing application ecosystem. This tends to be one of the most cumbersome steps where various application and ecosystem constraints should be satisfied for a target hardware platform, all without compromising the model accuracy.

NVIDIA Triton Inference Server is an open-source model serving tool that simplifies inference and has several features to maximize hardware utilization and increase inference performance. This includes features like:

There are several key decisions to be made when optimizing model deployment:

These key decisions lead to a combinatorial explosion, where hundreds of possible configurations are available for each model and hardware choice. Often, this leads to wasted development time or costly subpar serving decisions.

In this post, we explore how the NVIDIA Triton Model Analyzer can automatically sweep through various serving configurations for your target hardware platform and find the best model configurations based on your application’s needs. This can improve developer productivity while increasing the utilization of serving hardware at the same time.

NVIDIA Triton Model Analyzer is a versatile CLI tool that helps with a better understanding of the compute and memory requirements of models served through NVIDIA Triton Inference Server. This enables you to characterize the tradeoffs between different configurations and choose the best one for your use case.

NVIDIA Triton Model Analyzer can be used with all the model formats that NVIDIA Triton Inference Server supports: TensorRT, TensorFlow, PyTorch, ONNX, OpenVINO, and others.

You can specify your application constraints (latency, throughput, or memory) to find the serving configurations that satisfy them. For example, a virtual assistant application might have a certain latency budget for the interaction to feel real-time for the end user. An offline processing workflow should be optimized for throughput to reduce the amount of required hardware and to keep the cost as low as possible. The available memory in the model serving hardware may be limited and necessitate the serving configuration to be optimized for memory.

As an example, we take a pretrained model and show how to use NVIDIA Triton Model Analyzer and optimize the serving of this model on a VM instance on Google Cloud Platform. However, the steps shown here can be used on any public cloud or on-premises with any model type that NVIDIA Triton Inference Server supports.

Begin by pulling the PyTorch container from NGC and install the transformers package within the container. If it is your first time using NGC, create an account. We use the 22.04 releases of the relevant tools throughout this post, which were the latest at the time of writing. NVIDIA Triton has a monthly release cadence and ships a new version at the end of every month.

When the transformers package is installed, run the following Python code to download the pretrained BERT Large model and trace it into TorchScript format.

For this model, the following code example is the model configuration file. For more information, see Model Configuration.

The recommended way to use Model Analyzer is to build the Docker image for it yourself:

Now that you have the Model Analyzer image built, spin up the container:

Different hardware configurations might lead to different optimal serving configurations. As such, it is important to run Model Analyzer on the target hardware platform where the models will be eventually served from.

For reproducibility of the results we present in this post, we ran our experiments in the public cloud. Specifically, we used an a2-highgpu-1g instance on Google Cloud Platform with a single NVIDIA A100 GPU.

A100 GPUs support Multi-Instance GPU (MIG), which can maximize the GPU utilization by splitting up a single A100 GPU up to seven partitions with hardware-level isolation that can independently run NVIDIA Triton servers. For the sake of simplicity, we did not use MIG for this post. For more information, see Deploying NVIDIA Triton at Scale with MIG and Kubernetes.

The default ranges swept through are up to five instances of a model and up to a batch size of 128. These defaults can be changed.

Using the preceding configuration, you can get the top line and the bottom line numbers for the model throughput and latency, respectively.

Model Analyzer also writes the collected measurements to checkpoint files when profiling. These are located within the specified checkpoint directory. You can use the profiled checkpoints to create data tables, summaries, and detailed reports of the results.

With the configuration file in place, you are now ready to run Model Analyzer:

As a sample, Table 1 shows a few rows from the results. Each row corresponds to an experiment run on a model configuration under a hypothetical client load.

To get a more detailed report of each model configuration tested, use the model-analyzer report command:

This generates a report that details the following:

This is a great start for any MLOps team to start their analysis before putting a model in production.

In a typical production environment, there are multiple teams that should work symbiotically to deploy AI models at a large scale in production. For example, there might be an MLOps team responsible for the model serving pipeline stability and handling the changes in the service-level agreements (SLAs) imposed by the applications. Separately, the infrastructure team is usually responsible for the entire GPU/CPU farm.

Assume that a product team requested that the MLOps team serve BERT Large with 99% of the requests processed within a latency budget of 30 ms. The MLOps team should consider various serving configurations on the available hardware to satisfy that requirement. Using Model Analyzer removes most of the friction in doing so.

The following code example is an example of a configuration file named latency_constraint.yaml, where we added a constraint on the 99th percentile of measured latency values to satisfy the given SLA.

Because you have the checkpoints from the previous sweep, you can reuse them for the SLA analysis. Running the following command gives you the top three configurations satisfying the latency constraint:

Table 2 shows the measurements taken for the top three configurations and how they compare to the default configuration.

In large-scale production, the software and the hardware constraints affect the SLA in production.

Assume that the constraints of the application have changed. The team would now like to satisfy a p99 latency of 50 ms along with a throughput of 30+ inferences per second for the same model. Also assume that the infrastructure team is able to spare 5,000 MB of GPU memory for its use. Manually finding a serving configuration to satisfy the stakeholders becomes harder and harder as the number of constraints increases. This is where the need for a solution like Model Analyzer becomes more obvious as you can now specify all of our constraints together in a single configuration file.

With this updated constraint in place, run the following command:

Model Analyzer now finds the serving configurations given below as the top three options and shows how they compare to the default configuration.

Even though we focused on a single model for this post, there are plans to have Model Analyzer perform the same analysis for multiple models at the same time. For example, you could define constraints on different models running on the same GPU and optimize each.

We hope you share our excitement about how much development time Model Analyzer will save and enable your MLOps teams to make well-informed decisions. For more information, see the /triton-inference-server/model_analyzer GitHub repo.