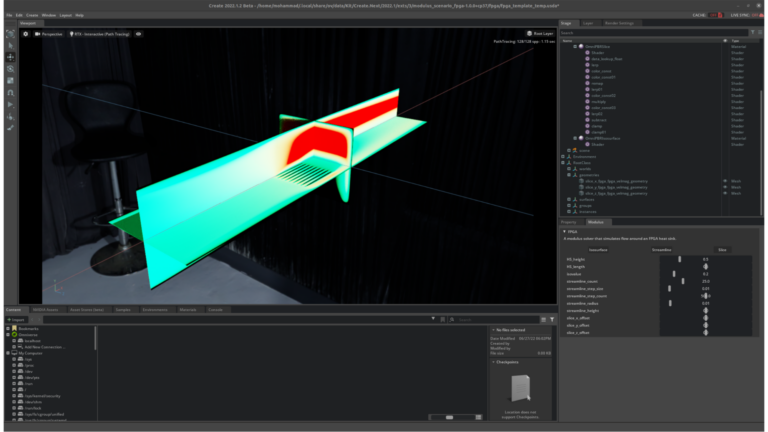 Learn how you can prepost process your NVIDIA Modulus simulations using the Modulus Omniverse extension.

NVIDIA Modulus is a physics-machine learning platform that blends the power of physics with data to build high-fidelity, parameterized AI surrogate models that serve as digital twins to simulate with near real-time latency.

This cutting-edge framework is expanding its interactive simulation capabilities by integrating with the NVIDIA Omniverse (OV) platform for real-time virtual-world simulation and full-design fidelity visualization.

Previously, you would need to set up the visualization pipeline, a key component of simulation and analysis workflows, on your own. Now, you can use the built-in pipeline in Omniverse for common output scenarios such as visualizing streamlines and iso-surfaces for the outputs of the Modulus-trained AI model. Another key feature is being able to visualize and analyze the high-fidelity simulation output in near real time as you vary design parameters.

The three key advantages of adding the Modulus-OV extension:

This is the first preview release of the Modulus-OV extension and the Modulus team welcomes any feedback or enhancement requests you may have. Please submit feedback to the Modulus NVIDIA Forum.

For this preview release, Modulus extension is supported only on the Linux platform and the GPU Memory requirements for running both Omniverse Create and Modulus can be quite high. For existing scenarios, we have observed minimum GPU requirements of an NVIDIA RTX 3090 or higher.

Simulation scenarios are prepackaged examples that help users get familiar with the capabilities of the extension.

For now, the following preconfigured scenarios are available to experiment with: modulus_scenario_fpga

Load this scenario extension by searching for its name in the extension manager (in the following, we will use modulus_scenario_fpga). Install and enable the extension. If you do this for the first time, this process can take a few minutes for the pretrained model to be downloaded and installed on your machine.

This scenario is based on the parameterized 3D heat sink example in Modulus, which, with the OV extension enabled you can visualize the airflow through the field-programmable gate array (FPGA) geometry.

In this scenario, the Modulus-trained parameterized neural network model is simulating airflow paths. The inference output data being used is the velocity magnitude, which is the airspeed at a given point defined on a volumetric surface. By putting a surface at a fairly low speed you can see where the airflow is slowing down, which would be the boundary, and as it hits the cooling fins shown in Figure 2.

A set of common visualization modes is available with this release of the extension. Each mode will populate the stage that is currently open in Omniverse Create with visualization geometry, which will be updated as you change parameters.

Another game-changing aspect of Modulus and Physics-ML is the ability to train a model on a parameterized space that can be used to infer a design space defined by a set of design parameters. Users can expose this within the scenario as various parameters knobs, that can be changed to infer and visualize the new simulation output in near real time. When you change these design parameters, the model is reevaluated to infer the new geometry and the output is visualized.

To learn more about the extension and this example, please refer to the Discord Live session where we talk more about Modulus, its capabilities, and the Modulus OV extension.