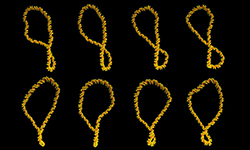 Using the highest-resolution images of a single DNA molecule captured to date, researchers in the U.K. discovered that coiled strands of genetic material twist and writhe while crammed in a cell.

Using the highest-resolution images of a single DNA molecule captured to date, researchers in the U.K. discovered that coiled strands of genetic material twist and writhe while crammed in a cell.

This previously unobserved movement was simulated on GPU-based systems including JADE, a University of Oxford supercomputer made up of NVIDIA DGX systems. Published in Nature Communications, this research could improve scientists’ understanding of DNA mechanics and inform the development of genetic therapies and diagnostics.

“GPUs have massively changed the capabilities of biomolecular simulation,” said Sarah Harris, associate professor at the University of Leeds and a researcher on the project, a collaboration among multiple universities.

By pairing high-resolution atomic force microscopy with HPC simulations, the team created the first videos of twisted DNA molecules called minicircles — where both ends of the molecule join together in a loop. Prior research suggests these minicircles might be markers of health, ageing, and disease.

Using the GPU-accelerated AMBER package, the researchers were able to model DNA structure with state-of-the-art force fields based on highly accurate quantum mechanical simulations. The dynamics of the molecular simulations were visualized with VMD, which was also used to confirm the presence of hydrogen bonding interactions in the coiled DNA structure.

Adding a twist to a strand of DNA, the researchers found, made the molecules more dynamic, displaying dance-like moves that might help the DNA bind to other molecules.

The minicircle simulations “are extremely exciting because they show, with remarkable detail, how wrinkled, bubbled, kinked, denatured, and strangely shaped they are, which we hope to be able to control someday,” said Professor Lynn Zechiedrich from Baylor College of Medicine, who provided the DNA minicircles for the study.

The combination of microscopy images and simulation enabled the researchers to see not just the DNA’s double-helix structure, but the position of each atom within the loop, which contains between 250 and 340 base pairs.