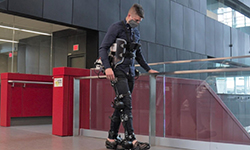 The project, described in an early-access paper on IEEE Transactions on Medical Robotics and Bionics, fits users with wearable cameras. AI software processes the camera’s video stream, and is being trained to recognize surrounding features such as stairs and doorways, and then determine the best movements to take.

People who rely on exoskeletons for mobility typically operate the devices using smartphone apps or joysticks.

“That can be inconvenient and cognitively demanding,” said Laschowski, who works with engineering professor John McPhee, the Canada Research Chair in Biomechatronic System Dynamics. “Every time you want to perform a new locomotor activity, you have to stop, take out your smartphone and select the desired mode.”

The researchers are using NVIDIA TITAN GPUs for neural network training and real-time image classification of walking environments. They collected 923,000 images of human locomotion environments to create a database dubbed ExoNet — which was used to train the initial model, developed using the TensorFlow deep learning framework.


Still in development, the exoskeleton system must learn to operate on uneven terrain and avoid obstacles before becoming fully functional. To boost battery life, the team plans to use human motion to help charge the devices.

The recent paper analyzed how the power a person uses to go from a sitting to standing position could create biomechanical energy usable to charge the robotic exoskeletons.

Read the University of Waterloo news release for more >>

The researchers’ latest paper is available here. The original paper, published in 2019 at the IEEE International Conference on Rehabilitation Robotics, was a finalist for a best paper award.