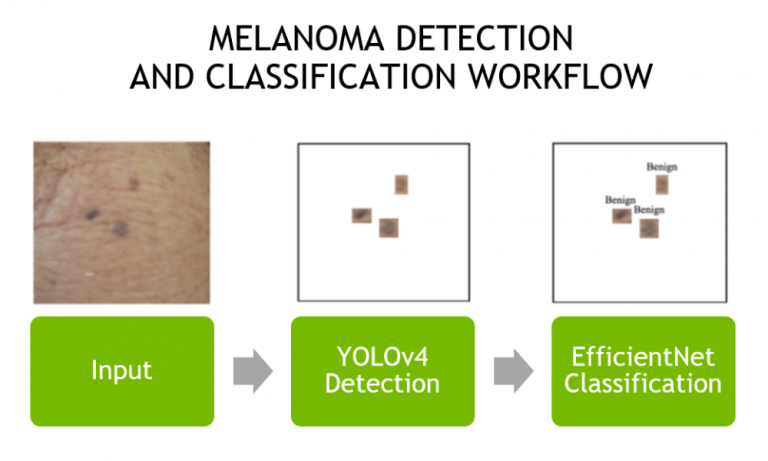 The most commonly diagnosed cancer in the US today is skin cancer. There are three main variants: melanoma, basal cell carcinoma (BCC), and squamous cell carcinoma (SCC). Though melanoma only accounts for roughly 1% of all skin cancers, it is the most fatal, metastasizing rapidly without early detection and treatment. This makes early detection critical, as numerous studies show significantly better survival rates when detection is done in its earliest stages.

The current diagnosis procedure is done through a visual examination by a dermatologist, followed by a biopsy to confirm any suspected pathology. This manual examination is dependent on human subjectivity and thus suffers from error at a concerning rate. When a primary care physician looks for skin cancer, their sensitivity, or ability to identify a patient with the disease correctly, is only 0.45, while a dermatologist has a sensitivity of 0.97.

In recent years, the use of deep learning to perform medical diagnostics has become a quickly growing field. In this post, we discuss developing an end-to-end example of how deep learning could lead to an automated dermatology exam system free of human bias, using the recently announced NVIDIA Clara AGX development kit.

This reference application is the pairing of two deep learning models:

Figure 1 shows the workflow of the algorithm using a single video frame. The application can use a high-definition webcam or IP camera as input to the models, or even run on a previously captured video.

The Clara AGX Developer Kit is currently available exclusively for members of the NVIDIA Clara Developer Partner Program. After you register, we’ll be in touch.

We’ve provided a research prototype of a dermatology application, but what would it take to transform this into a real application?