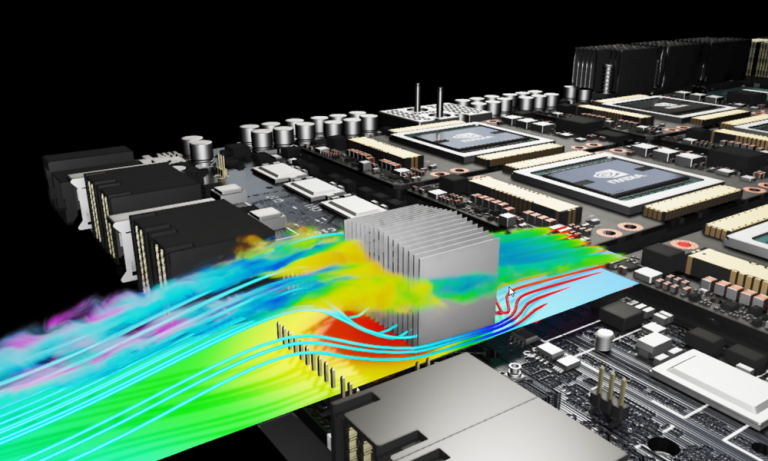 Today, NVIDIA announces the release of SimNet v21.06 for general availability, enabling physics simulations across a variety of use cases.

NVIDIA SimNet is a Physics-Informed Neural Networks (PINNs) toolkit for engineers, scientists, students, and researchers who either want to get started with AI-driven physics simulations, or would like to leverage a powerful framework to implement their domain knowledge to solve complex nonlinear physics problems with real-world applications.

V21.06 builds on a successful early access program of baseline features, and layers on additional new capabilities. This GA release introduces support for new physics such as Electromagnetics and 2D wave propagation, as well as delivers a new algorithm that enables wider number of use cases for simulating more complex Fluid-Thermal systems. New time stepping schemes have been implemented for solving temporal problems, treating time as both discrete and continuous.

Time Stepping Scheme for Temporal Physics
Transient simulations are required for many computational problems in such fields as fluid dynamics and electromagnetism. Until recently, neural network solvers have struggled to obtain accurate results. Using several innovations in this field, SimNet is now able solve a variety of transient problems to significantly greater degree of speed and accuracy. Shown below is Taylor-Green vortex decay using transient and turbulent Navier-Stokes simulation.

Transfer Learning
In repetitive trainings, such as training for surrogate-based design optimization or uncertainty quantification, transfer learning reduces the time to convergence for neural network solvers. Once a model is trained for a single geometry, the trained model parameters are transferred to solve a different geometry, without having to train on the new geometry from scratch.

Gradient Aggregation
Training of a neural network solver for complex problems requires a large batch size that can be beyond the available GPU memory limits. Increasing the number of GPUs can effectively increase the batch size but in case of limited GPU availability, you can use gradient aggregation. With gradient aggregation, the required gradients are computed in several forward/backward iterations using different mini batches of the point cloud and are then aggregated and applied to update the model parameters. This will, in effect, increase the batch size (although at the cost of increasing the training time).

Increasing the batch size can improve the accuracy of neural network solvers.

Join our new Forum for community discussion. Post your questions and comments pertaining to AI-driven physics simulations with NVIDIA SimNet.

Give SimNet v21.06 a try today by downloading it here.