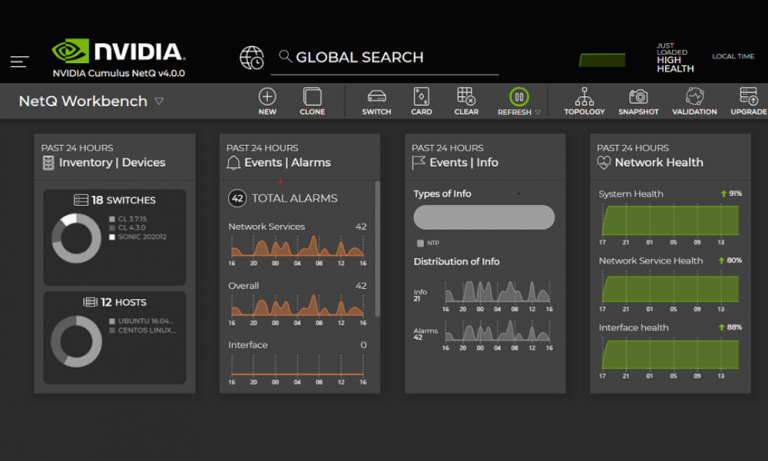 NVIDIA NetQ is a highly-scalable modern network operations tool leveraging fabric-wide telemetry data for visibility and troubleshooting of the overlay and underlay network in real-time.

NVIDIA NetQ 4.0.0 was recently released with many new capabilities. NVIDIA NetQ is a highly-scalable modern network operations tool leveraging fabric-wide telemetry data for visibility and troubleshooting of the overlay and underlay network in real-time. NetQ can be deployed on customer premises, or can be consumed as cloud-based service (SaaS). For more details, refer to the NetQ datasheet.

Refer to the NetQ 4.0.0 User Guide for details and all the other capabilities introduced.

In the physical production network, NetQ validations provide insight into the live state of the network and helps with  troubleshooting. NetQ 4.0.0 provides the ability to:

NVIDIA What Just Happened (WJH) is a hardware-accelerated telemetry feature available on NVIDIA Spectrum switches, which streams detailed and contextual telemetry data for analysis. WJH provides real-time visibility into problems in the network, such as hardware packet drops due to misconfigurations, buffer congestion, ACL, or layer 1 problems.

NetQ now monitors the switches with SONiC (Software for Open Networking in the Cloud) operating system as well as Cumulus Linux. SONiC support includes traces, validations, snapshots, events, service visibility and What Just Happened. This is an early access feature.

The NetQ GUI is enhanced to show switch details in the topology view.  Using the GUI, premises can be renamed and deleted.

NVIDIA AIR is updated with NetQ 4.0.0, check out and upgrade your environment to take advantage of all the new capabilities. To learn more, visit the NVIDIA ethernet switching solutions webpage.