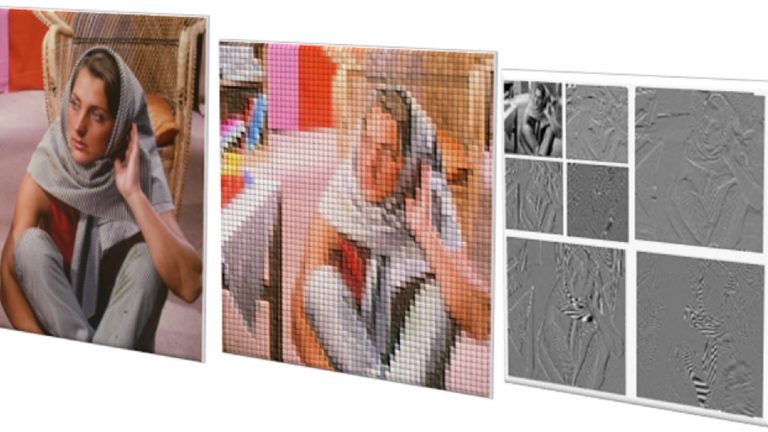 JPEG 2000 (.jp2, .jpg2, .j2k) is an image compression standard defined by the Joint Photographers Expert Group (JPEG) as the more flexible successor to the still popular JPEG standard. Part 1 of the JPEG 2000 standard, which forms the core coding system, was first approved in August 2002. To date, the standard has expanded to … Continued

JPEG 2000 (.jp2, .jpg2, .j2k) is an image compression standard defined by the Joint Photographers Expert Group (JPEG) as the more flexible successor to the still popular JPEG standard. Part 1 of the JPEG 2000 standard, which forms the core coding system, was first approved in August 2002. To date, the standard has expanded to 17 parts, covering areas like Motion JPEG2000 (Part 3) which extends the standard for video, extensions for three-dimensional data (Part 10), and so on.

The JPEG 2000 feature set provides ample opportunities for GPU acceleration when compared to its predecessor, JPEG. Through GPU acceleration, images can be decoded in parallel and larger images can be processed quicker. nvJPEG2000 is a new library that accelerates the decoding of JPEG 2000 images on NVIDIA GPUs. It supports codec features commonly used in geospatial imaging, remote sensing, and digital pathology. Figure 1 overviews the decoding stages that nvJPEG2000 accelerates.

The Tier1 Decode (entropy decode) stage is the most compute-intensive stage of the entire decode process. The entropy decode algorithm used in the legacy JPEG codec was serial in nature and was hard to parallelize.

In this section, we concentrate on the new nvJPEG2000 API tailored for the geospatial domain, which enables decoding specific tiles within an image instead of decoding the full image.

Imaging data captured by the European Space Agency’s Sentinel 2 satellites are stored as JPEG 2000 bitstreams. Sentinel 2 level 2A data downloaded from the Copernicus hub can be used with the nvJPEG2000 decoding examples. The imaging data has 12 bands or channels and each of them is stored as an independent JPEG 2000 bitstream. The image in Figure 2 is subdivided into 121 tiles. To speed up the decode of multitile images, a new API called nvjpeg2kDecodeTile has been added in nvJPEG2000 v 0.2, which enables you to decode each tile independently.

For multitile images, decoding each tile sequentially would be suboptimal. The GitHub multitile decode sample demonstrates how to decode each tile on a separate cudaStream_t. By taking this approach, you can simultaneously decode multiple tiles on the GPU. Nsight Systems trace in Figure 3 shows the decoding of Sentinel 2 data set consisting of 12 bands. By using 10 CUDA streams, up to 10 tiles are being decoded in parallel at any point during the decode process.

JPEG 2000 is used in digital pathology to store whole slide images (WSI). Figure 4 gives an overview of various deep learning techniques that can be applied to WSI. Deep learning models can be used to distinguish between cancerous and healthy cells. Image segmentation methods can be used to identify a tumor location in the WSI. For more information, see Deep neural network models for computational histopathology: A survey.

The image in question is large and it is not possible to decode the entire image at one time due to the amount of memory required. The size of the decode output is around 53 GB (92000×201712 * 3). This is excluding the decoder memory requirements.

There are several approaches to handling such large images. In this post, we describe two of them:

Both approaches can be easily performed using specific nvJPEG2000 APIs.

Decoding an area of interest in an image

For more information about how to partially decode an image with multiple tiles, see the Decode Tile Decode GitHub sample.

Decoding lower resolutions of an image

The digital pathology image described in Table 2 has 12 resolutions. This information can be retrieved on a per-tile basis:

Figures 6 and 7 show the average speedup when decoding one image at a time. The following images are used in the measurements:

On NVIDIA Ampere Architecture GPUs such as NVIDIA RTX A6000, the speedup factor is more than 8x for decoding. This speedup is measured for single-image latency.

Even higher speedups can be achieved by batching the decode of multiple images. Figures 8 and 9 compare the speed of decoding a 1920×1080 8-bit image with 444 chroma subsampling (Full HD) in both lossless and lossy modes respectively across multiple GPUs.

Figures 8 and 9 demonstrate the benefits of batched decode using the nvJPEG2000 library. There’s a significant performance increase on GPUs with a large number of streaming multiprocessors (SMs), such as A100 and NVIDIA RTX A6000, than with smaller numbers of SMs, such as NVIDIA RTX 4000 and T4. By batching, you are making sure that the compute resources available are efficiently used.

As observed from Figure 8, the decode speed on an NVIDIA RTX A6000 is 232 images per second for a batch size of 20. This equates to an additional 3x speed over batch size = 1, based on a benchmark image with a low compression ratio. The compressed bitstream is only about 3x smaller than the uncompressed image. At higher compression ratios, the speedup is faster.

The following GitHub samples show how to achieve this speedup both at image and tile granularity:

The nvJPEG2000 library accelerates the decoding of JPEG2000 images both in size and volume using NVIDIA GPUs by targeting specific image-processing tasks of interest. Decoding JPEG 2000 images using the nvJPEG2000 library can be as much as 8x faster on GPU (NVIDIA RTX A6000) than on CPU. A further speedup of 3x (24x faster than CPU) is achieved by batching the decode of multiple images.