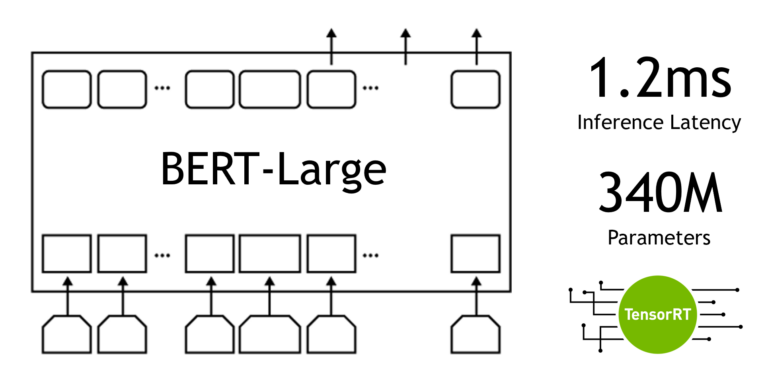 Today, NVIDIA is releasing TensorRT 8.0, which introduces many transformer optimizations. With this post update, we present the latest TensorRT optimized BERT sample and its inference latency benchmark on A30 GPUs. Using the optimized sample, you can execute different batch sizes for BERT-base or BERT-large within the 10 ms latency budget for conversational AI applications.

This post was originally published in August 2019 and has been updated for NVIDIA TensorRT 8.0.

Large-scale language models (LSLMs) such as BERT, GPT-2, and XL-Net have brought exciting leaps in accuracy for many natural language processing (NLP) tasks. Since its release in October 2018, BERT (Bidirectional Encoder Representations from Transformers), with all its many variants, remains one of the most popular language models and still delivers state-of-the-art accuracy.

BERT provided a leap in accuracy for NLP tasks that brought high-quality, language-based services within the reach of companies across many industries. To use the model in production, you must consider factors such as latency and accuracy, which influences end-user satisfaction with a service. BERT requires significant compute during inference due to its 12/24-layer stacked, multihead attention network. This has posed a challenge for companies to deploy BERT as part of real-time applications.

Today, NVIDIA is releasing version 8 of TensorRT, which brings the inference latency of BERT-Large down to 1.2 ms on NVIDIA A100 GPUs with new optimizations on transformer-based networks. New generalized optimizations in TensorRT can accelerate all such models, reducing inference time to half the time compared to TensorRT 7.

TensorRT is a platform for high-performance, deep learning inference, which includes an optimizer and runtime that minimizes latency and maximizes throughput in production. With TensorRT, you can optimize models trained in all major frameworks, calibrate for lower precision with high accuracy, and finally deploy in production.

All the code for achieving this performance with BERT is being released as open source in this NVIDIA/TensorRT GitHub repo. We have optimized the Transformer layer, which is a fundamental building block of the BERT encoder so that you can adapt these optimizations to any BERT-based NLP task. BERT is applied to an expanding set of speech and NLP applications beyond conversational AI, all of which can take advantage of these optimizations.

Question answering (QA) or reading comprehension is a popular way to test the ability of models to understand the context. The SQuAD leaderboard tracks the top performers for this task, for a dataset and test set that they provide. There has been rapid progress in QA ability in the last few years, with global contributions from academia and companies.

In this post, we demonstrate how to create a simple QA application using Python, powered by TensorRT-optimized BERT code that NVIDIA released today. The example provides an API to input passages and questions, and it returns responses generated by the BERT model.

Here’s a brief review of the steps to perform training and inference using TensorRT for BERT.

A major problem faced by NLP researchers and developers is scarcity of high-quality labeled training data for their specific NLP task. To overcome the problem of learning a model for the task from scratch, breakthroughs in NLP use the vast amounts of unlabeled text and break the NLP task into two parts:

These two stages are typically referred to as pretraining and fine-tuning. This paradigm enables the use of the pretrained language model to a wide range of tasks without any task-specific change to the model architecture. In this example, BERT provides a high-quality language model that is fine-tuned for QA but suitable for other tasks such as sentence classification and sentiment analysis.

You can either start with the pretrained checkpoints available online or pretrain BERT on your own custom corpus (Figure 1). You can also initialize pretraining from a checkpoint and then continue training on custom data.

Pretraining with custom or domain-specific data may yield interesting results, for example BioBert. However, it is computationally intensive and requires a massively parallel compute infrastructure to complete within a reasonable amount of time. GPU-enabled, multinode training is an ideal solution for such scenarios. For more information about how NVIDIA developers were able to train BERT in less than an hour, see Training BERT with GPUs.

Set up your environment to perform BERT inference with the following steps:

We use scripts to perform these steps, which you can find in the TensorRT BERT sample repo. While we describe several options that you can pass to each script, to get started quickly, you could also run the following code example:

Now, give it a passage and see how much information it can decipher by asking a few questions.

The result of this command should be something similar to the following:

Given the same passage with a different question, you should get the following result:

The answers provided by the model are accurate based on the text of the passage that was provided. The sample uses FP16 precision for performing inference with TensorRT. This helps achieve the highest performance possible on Tensor Cores in NVIDIA GPUs. In our tests, we measured the accuracy of TensorRT to be comparable to in-framework inference with FP16 precision.

Here are the options available with the scripts. The docker/build.sh script builds the docker image using the Dockerfile supplied in the docker folder. It installs all necessary packages, depending on the OS you are selecting as Dockerfile. For this post, we used ubuntu-18.04 but dockerfiles for ubuntu-16.04 and ubuntu-20.04 are also provided.

Run the script as follows:

This script by default downloads fine-tuned TensorFlow BERT-large, with FP16 precision and a sequence length of 128. In addition to the fine-tuned model, you use the configuration file, enumerating model parameters and the vocabulary file used to convert BERT model output to a textual answer.

Here are the optional arguments:

You should now have a TensorRT engine, engines/bert_large_128.engine,  to use in the inference.py script for QA.

Later in this post, we describe the process to build the TensorRT engine. You can now provide a passage and a query to inference.py and see if the model is able to answer your queries correctly.

There are few ways to interact with the inference script:

Here are the parameters for the inference.py script:

This script uses a prebuilt TensorRT BERT QA engine to answer a question based on the provided passage.

Here are the optional arguments:

For a step-by-step description and walkthrough of the inference process, see the Python script inference.py and the detailed Jupyter notebook inference.ipynb in the sample folder. Here are a few key parameters and concepts for performing inference with TensorRT.

BERT, or more specifically, the encoder layer, uses the following parameters to govern its operation:

The value of these parameters, which depend on the BERT model chosen, are used to set the configuration parameters for the TensorRT plan file (execution engine).

For each encoder, also specify the number of hidden layers and the attention head size. You can also read all the earlier parameters from the TensorFlow checkpoint file.

As the BERT model we are using has been fine-tuned for a downstream task of QA on the SQuAD dataset, the output for the network (that is, the output fully connected layer) is a span of text where the answer appears in the passage, referred to as  h_output in the sample. After you generate the TensorRT engine, you can serialize it and use it later with TensorRT runtime.

The inputs to the BERT model (Figure 3) include the following:

The outputs (start_logits and end_logits) represent the span of the answer, which the network predicts inside the passage based on the question.

BERT can be applied both for online and offline use cases. Online NLP applications, such as conversational AI, place tight latency budgets during inference. Several models need to execute in a sequence in response to a single user query. When used as a service, the total time a customer experiences includes compute time as well as input and output network latency. Longer times lead to a sluggish performance and a poor customer experience.

While the exact latency available for a single model can vary by application, several real-time applications need the language model to execute in under 10 ms.

Using an NVIDIA Ampere Architecture A100 GPU, BERT-Large optimized with TensorRT 8 can perform inference in 1.2ms for a QA task similar to that available in SQuAD with batch size = 1 and sequence length = 128.

Using the TensorRT optimized sample, you can execute different batch sizes for BERT-base or BERT-large within the 10 ms latency budget. For example, the latency for inference on a BERT-Large model with sequence length = 384 batch size = 1 on A30 with TensorRT8 was 3.62ms. The same model, sequence length =384 with highly optimized code on a CPU-only platform (**) for batch size = 1 was 76ms.

The performance measures the compute-only latency time for executing the network on a QA task between passing tensors as input and gathering logits as output. You can find the code used to benchmark the sample in the script scripts/inference_benchmark.sh in the repo.

NVIDIA is releasing TensorRT 8.0, which makes it possible to perform BERT inference in 0.74ms on A30 GPUs. The code for benchmarking inference on BERT is available as a sample in the TensorRT open-source repo.

This post gives an overview of how to use the TensorRT sample and performance results. We further describe a workflow of how to use the BERT sample as part of a simple application and Jupyter notebook where you can pass a paragraph and ask questions related to it. The new optimizations and performance achievable makes it practical to use BERT in production for applications with tight latency budgets, such as conversational AI.

We are always looking for new ideas for new examples and applications to share. What NLP applications do you use BERT for and what examples would you like to see from us in the future?

If you have questions regarding the TensorRT sample repo, check the NVIDIA TensorRT Developer Forum to see if other members of the TensorRT community have a resolution first. NVIDIA Registered Developer Program members can also file bugs at https://developer.nvidia.com/nvidia-developer-program.