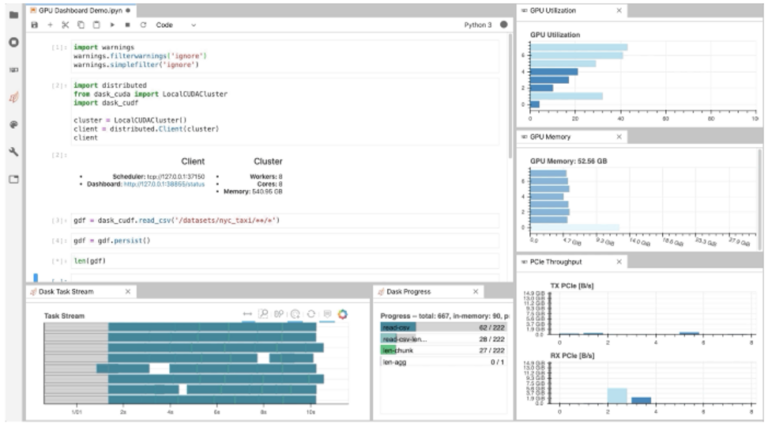 Learn how NVDashboard in Jupyter Lab is a great open-source package to monitor system resources for all GPU and RAPIDS users to achieve optimal performance and day to day model and workflow development.

This post was originally published on the RAPIDS AI blog here.

NVDashboard is an open-source package for the real-time visualization of NVIDIA GPU metrics in interactive Jupyter Lab environments. NVDashboard is a great way for all GPU users to monitor system resources. However, it is especially valuable for users of RAPIDS, NVIDIA’s open-source suite of GPU-accelerated data-science software libraries.

Given the computational intensity of modern data-science algorithms, there are many cases in which GPUs can offer game-changing workflow acceleration. To achieve optimal performance, it is absolutely critical for the underlying software to use system resources effectively. Although acceleration libraries (like cuDNN and RAPIDS) are specifically designed to do the heavy lifting in terms of performance optimization, it can be very useful for both developers and end-users to verify that their software is actually leveraging GPU resources as intended. While this can be accomplished with command-line tools like nvidia-smi, many professional data scientists prefer to use interactive Jupyter notebooks for day-to-day model and workflow development.

As illustrated in Fig. 1, NVDashboard enables Jupyter notebook users to visualize system hardware metrics within the same interactive environment they use for development. Supported metrics include:

The package is built upon a Python-based dashboard server, which support the Bokeh visualization library to display and update figures in real time[1] . An additional Jupyter-Lab extension embeds these dashboards as movable windows within an interactive environment. Most GPU metrics are collected through PyNVML, an open-source Python package composing wrappers for the NVIDIA Management Library (NVML). For this reason, the available dashboards can be modified/extended to display any queryable GPU metrics accessible through NVML.

The nvdashboard package is available on PyPI, and consists of two basic components:

The practice of directly querying hardware metrics is often the best way to validate efficient run-time behavior, and this is especially true for interactive Jupyter-notebook users. In this case, the development process is often iterative, and improper GPU utilization results in huge productivity losses. As shown in Fig. 1, NVDashboard makes visualizing resource utilization easy for Jupyter-Lab users right alongside their code.

To install both the server and client-side components, run the following in a terminal:

After NVDashborad is installed, a “GPU Dashboards” menu should be visible along the left-hand side of your Jupyter-Lab environment (see Fig. 2). Clicking on one of these buttons automatically adds a movable window, with a real-time display of the desired dashboard.

It is important to clarify that NVDashboard automatically monitors the GPU resources for the entire machine, not only those being used by the local Jupyter environment. The Jupyter-Lab extension can certainly be used for non-iPython/notebook development. For example, in Fig. 3, the “NVLink Timeline” and “GPU Utilization” dashboards are being used within a Jupyter-Lab environment to monitor a multi-GPU deep-learning workflow executed from the command line.

While the Jupyter-Lab extension is certainly ideal for fans of iPython/notebook-based development, other GPU users can also access the dashboards using a sandalone Bokeh server. This is accomplished by running.

After starting the Bokeh server, the GPU dashboards are accessed by opening the appropriate url in a standard web browser (for example, http://:). As shown in Fig. 4, the main menu lists all dashboards available in NVDashboard.

Alternatively, one can also clone the jupyterlab-nvdashboard repository, and simply execute the server.py script (for example, python jupyterlab_nvdashboard/server.py ).

The existing nvdashboard package provides a number of useful GPU-resource dashboards. However, it is fairly straightforward to modify existing dashboards and/or create completely new ones. In order to do this, you simply need to leverage PyNVML and Bokeh.

PyNVML is a python wrapper for the NVIDIA Management Library (NVML), which is a C-based API for monitoring and managing various states of NVIDIA GPU devices. NVML is directly used by the better-known NVIDIA System Management Interface (nvidia-smi). According to the NVIDIA developer site, NVML provides access to the following query-able states (in additional to modifiable states not discussed here):

Although several different python wrappers for NVML currently exist, we use the PyNVML package hosted by GoAi on GitHub. This version of PyNVML uses ctypes to wrap most of the NVML C API. NVDashboard utilizes only a small subset of the API needed to query real-time GPU-resource utilization, including:

In the current version of PyNVML, the python function names are usually chosen to exactly match the C API. For example, to query the current GPU-utilization rate on every available device, the code would look something like this:

Note that, in addition to the GitHub repository, PyNVML is also hosted on PyPI and Conda Forge.

In order to modify/add a GPU dashboard, it is only necessary to work with two files (jupyterlab_bokeh_server/server.py and jupyterlab_nvdashboard/apps/gpu.py). Most of the PyNVML and bokeh code needed to add/modify a dashboard will be in gpu.py. It is only necessary to modify server.py in the case that you are adding or changing a menu/display name. In this case, the new/modified name must be specified in routes dictionary (with the key being the desired name, and the value being the corresponding dashboard definition):

In order for the server to constantly refresh the PyNVML data used by the bokeh applications, we use bokeh’s ColumnDataSource class to define the source of data in each of our plots. The ColumnDataSource class allows an update function to be passed for each type of data, which can be called within a dedicated callback function (cb) for each application. For example, the existing gpu application is defined like this:

Note that the real-time update of PyNVML GPU-utilization data is performed within the source.data.update() call. With the necessary ColumnDataSource logic in place, the standard GPU definition (above) can be modified in many ways. For example, swapping the x and y axes, specifying a different color palette, or even changing the figure from an hbar to something else entirely.

In order to package this up as a Jupyter Lab extension we need our bokeh server to be run when Jupyter Lab starts. We can do this by adding jupyter-server-proxy as a dependency and registering an entrypoint in our setup.py:

This results in Jupyter Lab launching our bokeh server when it is run and proxying traffic through from /nvdashboard to it.

Then we can write a JavaScript frontend extension for Jupyter Lab which adds a sidebar menu with a list of dashboards which are opened as IFrames in new tabs in the interface. This is installed by running jupyter labextension install jupyterlab-nvdashboard.

There is also a custom Bokeh server endpoint in the Python side of things which serves a list of all the available dashboards and their URLs as a json file at /nvdashboard/index.json. The front end can use this json file to populate the menu automatically. This means that if we want to add any new dashboards we can do everything on the Python side by adding new Bokeh apps and the Jupyter Lab extension will pick them up automatically.