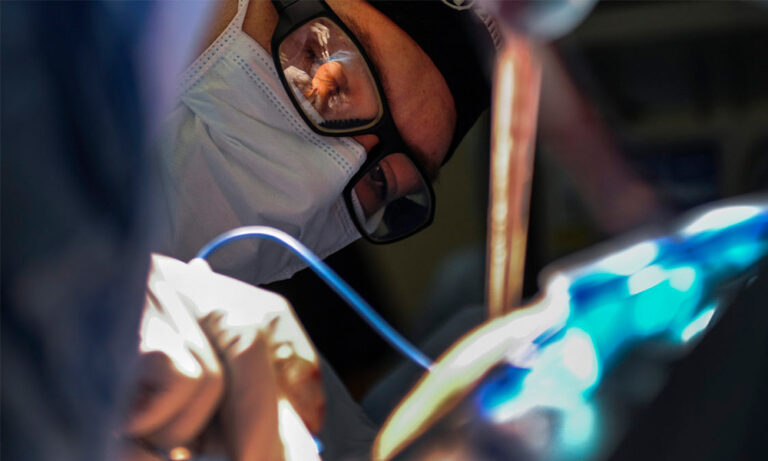 The NVIDIA Clara AGX Developer Kit, which is now available, combines the efficient Arm-based embedded computing of the AGX Xavier SoC with the powerful NVIDIA RTX 6000 GPU and the 100 GbE connectivity of the NVIDIA ConnectX-6 network processor. This brings real-time AI acceleration to the next generation of intelligent, software-defined, embedded medical devices. Developers using the Clara AGX Developer Kit for surgical video applications—such as AI-enhanced endoscopy, laparoscopy, or other minimally invasive procedures—require the minimum possible end-to-end latency in their video processing path. Customers can use the Clara Holoscan SDK v0.1 on the Clara AGX Developer Kit today and on the next-generation developer kit in the second half of 2022.

The demands of surgical video necessitate consistent and reliable low-latency, between the image captured by the endoscope and the image projected on a monitor. This provides surgeons with real-time control of their tools and monitoring of the patient.

In a typical endoscopy system, the image is digitized at the camera sensor in the endoscope, serialized by an FPGA or ASIC and transmitted to a video processor where it is written to an input frame buffer, processed, written to an output frame buffer, and then transmitted serially to the monitor.  Each of these steps adds latency to the video pipeline.  Developers who wish to add advanced GPU-accelerated AI processing are then faced with additional transmission latency due to the need to write the data from the video capture card to system memory, then transfer it via the CPU and PCIe bus to the GPU.

GPU compute performance is a key component of the NVIDIA Clara Holoscan platform. To optimize GPU-based video processing applications, NVIDIA has partnered with AJA Video Systems to integrate their line of video capture cards with the Clara AGX Developer Kit.  AJA provides a wide range of proven, professional video I/O devices. The partnership between NVIDIA and AJA has led to the addition of Clara AGX Developer Kit support in the AJA NTV2 SDK and device drivers as of the NTV2 SDK 16.1 release.

NVIDIA Clara Holoscan SDK v0.1 builds on the features of the previous Clara AGX SDK and adds tools to allow for detailed measurement of video transfer latency between video I/O cards, the CPU, and the GPU. This will enable users to measure latency with various configurations, allowing them to focus on improving bottlenecks and optimizing their workflows for minimum end-to-end latency.

The total time for video data transfer to and from the GPU, as well as time remaining for processing in the GPU, was then measured with and without GPUDirect enabled:

Note that GPUDirect cuts transfer time approximately in half by removing the need for writes to system memory. GPUDirect allows for the transfer and processing of 4K UHD RGBA inputs at 60 fps. This can now be transferred under the 16.666 ms frame time, whereas without GPUDirect this format could not be transferred at 60 fps. This allows for uncompressed high-resolution video to be natively alpha-blended with overlays from AI workflows. There is no need for conversion from YUV to RGBA formats, and no compromise in the 60 fps frame rate.

For instructions on how to set up and use an AJA device with the Clara AGX Developer Kit, including RDMA and DeepStream integration, go to Chapter 9 of the Clara HoloClara Holoscan SDK User Guide.