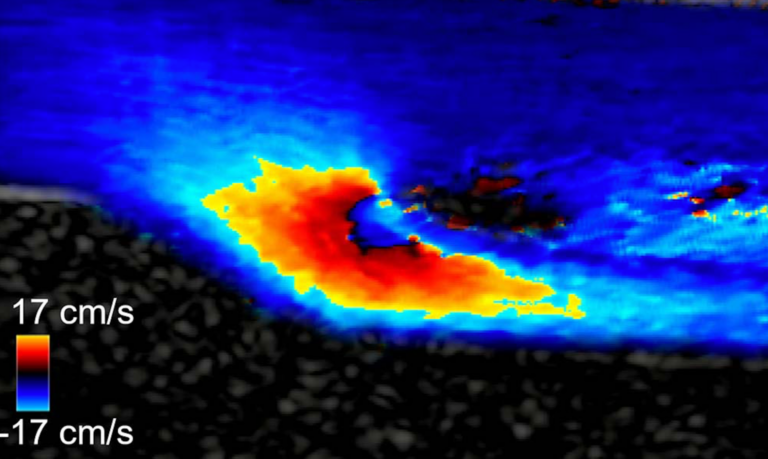 At RSNA 2021, there are dedicated tracks on ultrasound imaging, which is a cost-effective way to see what is going on inside a patient’s body without exposure to radiation or the need for injections and surgeries.

Ultrasound imaging is typically done by trained sonographers and needs special expertise to interpret. The probe is a small transducer to both transmit sound waves into the body and record the waves that echo back. It is placed on the skin and as it moves, waves bounce off your blood cells, organs, and other body parts, and then back to the device. A computer then takes all the sound waves and turns them into moving images that you visualize on a screen.

Color Doppler imaging (CDI) is a non-invasive way to see blood flow in arteries and veins. It is used to identify a blockage, blood clot, or narrowing of the arteries that can lead to deadly clinical outcomes such as a stroke or heart attack. These blockages can occur in a variety of arteries in the body and significantly alter the properties of blood flow. The flow alterations can be captured by CDI and used in the identification and monitoring of diseased conditions. CDI can also be used for detecting aneurysms, where swollen artery walls can also impact blood flow.

Figure 2 shows a typical CDI sequence obtained from a carotid artery model where flow comes in from the left side of the image, then branches out into the upper and lower branches. Flow speed in the artery is shown in shades of blue or red, depending on its direction relative to the probe. The surrounding grayscale image shows the tissue structure.  The CDI sequence also shows how blood flow dynamics can change throughout the cardiac cycle, which is typically less than a second long.

For example, Figure 3 shows that flow in the upper branch is fast and exceeds the maximum measurable flow speed on the color scale (25 cm/s). The color chosen for this region is therefore picked from the opposite end of the color scale and incorrectly indicates that flow is going in the opposite direction. The maximum measurable speed stems from underlying system limitations and imaging considerations.

Aliasing is most problematic in tortuous vasculature such as bifurcations and in conditions where a wide range of multidirectional velocities are encountered. CDI in such conditions can become difficult to interpret.

The LITMUS group devised a new deep learning–based solution to address these aliasing artifacts in CDI for the femoral artery bifurcation.  The femoral artery bifurcation in the thigh was chosen due to its diverse flow properties, including a wide range of flow speeds and multidirectional flow. The artery can be a site of blockage in conditions of peripheral artery disease and would be susceptible to aliasing in the bifurcation, even in healthy conditions.

To address aliasing artifacts in CDI, the LITMUS group devised a two-step process:

For the aliasing segmentation, a U-Net CNN was trained to detect aliasing artifacts using several relevant ultrasound features that are often computed in typical CDI pipelines and can contain features that are relevant for aliasing detection. The network was trained on 1,136 frames obtained from three real femoral artery bifurcation acquisitions using a us4us ultrasound frontend. The aliasing artifacts in CDI were manually labelled for training and validation. The model definition and training were done in TensorFlow.

The segmentation maps were then leveraged by an adaptive phase unwrapping algorithm that reverses the aliasing artifact according to flow continuity criteria so that a smooth aliasing-free flow profile is achieved. The framework was then evaluated on a new acquisition from an unseen femoral artery bifurcation acquisition, where it was shown to deal with multidirectional and excessive aliasing.

The framework was computationally demanding, requiring more than 500 ms per frame for simple de-aliasing, and even slower for excessive aliasing cases.

CDI is widely expected to be a point-of-care modality that can be used to gain quick and immediate insights into blood flow conditions in patients. Offline processing would disrupt this utility of CDI, so it is important that the aliasing removal framework be run in real time.

NVIDIA and the LITMUS group collaborated to accelerate the de-aliasing framework to achieve real-time performance that would be suitable in a bedside application, using the NVIDIA Clara Holoscan SDK and the NVIDIA Clara AGX Developer kit.

Raw sensor data is continuously copied to the NVIDIA RTX 6000 GPU in the Clara AGX developer kit where custom CUDA-built kernels perform the necessary processing for image formation. The pretrained U-Net TensorFlow model was implemented using the Tensor RT API and the adaptive phase unwrapping algorithm was accelerated using the CUDA-NPP library. Further CUDA and OpenGL functions were used for display. The result was a complete raw-sensor-data-to-de-aliased-CDI package that was run on the Clara AGX Developer Kit with demonstrated real-time performance.

Figure 5 shows the aliasing resistant CDI framework in action on the Clara AGX developer kit, processing raw sensor data from a femoral bifurcation model to aliasing resistant CDI in live mode. The raw data was acquired using the us4us frontend, which gives researchers access to all the fundamental signals as they arrive from the probe:

The processing time of the de-aliasing module was improved to 30 fps, a 12x improvement from the previous 2-2.5 fps. In building up to this, CuPy was used to prototype and get quick GPU acceleration, giving an intermediate ~15 fps.

The LITMUS group’s workflow showed how the NVIDIA Clara AGX Developer Kit and the NVIDIA Clara Holoscan SDK can resolve aliasing artifacts in CDI, in real time. Removing aliasing makes image visualization and interpretation easier by removing the ambiguity about the blood flow direction. This makes the most impact in tortuous vasculature where flow direction can be difficult to guess by the sonographer.