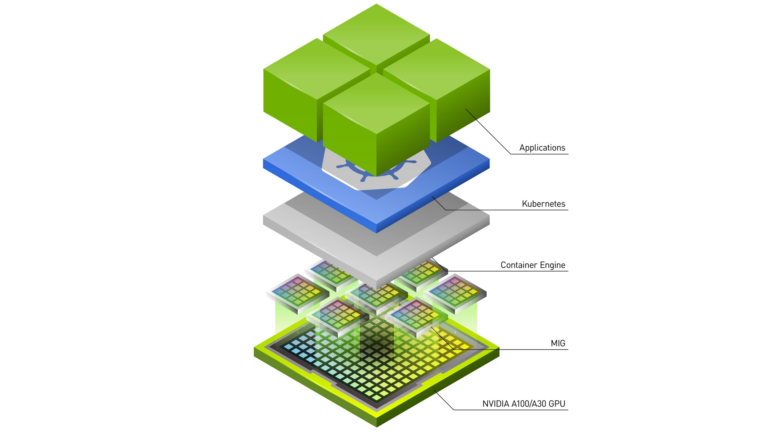 Different applications across this spectrum can have different computational requirements. Training giant AI models where the GPUs batch process hundreds of data samples in parallel, keeps the GPUs fully utilized during the training process. However, many other application types may only require a fraction of the GPU compute, thereby resulting in underutilization of the massive computational power.

In such cases, provisioning the right-sized GPU acceleration for each workload is key to improving utilization and reducing the operational costs of deployment, whether on-premises or in the cloud.

To address the challenge of GPU utilization in Kubernetes (K8s) clusters, NVIDIA offers multiple GPU concurrency and sharing mechanisms to suit a broad range of use cases. The latest addition is the new GPU time-slicing APIs, now broadly available in Kubernetes with NVIDIA K8s Device Plugin 0.12.0 and the NVIDIA GPU Operator 1.11. Together, they enable multiple GPU-accelerated workloads to time-slice and run on a single NVIDIA GPU.

Before diving into this new feature, here’s some background on use cases where you should consider sharing GPUs and an overview of all the technologies available to do that.

Here are some example workloads that can benefit from sharing GPU resources for better utilization:

In this post, we explore the various technologies available for sharing access to NVIDIA GPUs in a Kubernetes cluster, including how to use them and the tradeoffs to consider while choosing the right approach.

The NVIDIA GPU hardware, in conjunction with the CUDA programming model, provides a number of different concurrency mechanisms for improving GPU utilization. The mechanisms range from programming model APIs, where the applications need code changes to take advantage of concurrency, to system software and hardware partitioning including virtualization, which are transparent to applications (Figure 1).

The asynchronous model of CUDA means that you can perform a number of operations concurrently by a single CUDA context, analogous to a host process on the GPU side, using CUDA streams.

A stream is a software abstraction that represents a sequence of commands, which may be a combination of computation kernels, memory copies, and so on that all execute in order. Work launched in two different streams can execute simultaneously, allowing for coarse-grained parallelism. The application can manage parallelism using CUDA streams and stream priorities.

The tradeoff with streams is that the APIs can only be used within a single application, thus offering limited hardware isolation, as all resources are shared, and error isolation between various streams.

When dealing with multiple CUDA applications, each of which may not fully utilize the GPU’s resources, you can use a simple oversubscription strategy to leverage the GPU’s time-slicing scheduler. This is supported by compute preemption starting with the Pascal architecture. This technique, sometimes called temporal GPU sharing, does carry a cost for context-switching between the different CUDA applications, but some underutilized applications can still benefit from this strategy.

Since CUDA 11.1 (R455+ drivers), the time-slice duration for CUDA applications is configurable through the nvidia-smi utility:

The tradeoffs with time-slicing are increased latency, jitter, and potential out-of-memory (OOM) conditions when many different applications are time-slicing on the GPU. This mechanism is what we focus on in the second part of this post.

You can take the oversubscription strategy described earlier a step further with CUDA MPS. MPS enables CUDA kernels from different processes, typically MPI ranks, to be processed concurrently on the GPU when each process is too small to saturate the GPU’s compute resources. Unlike time-slicing, MPS enables the CUDA kernels from different processes to execute in parallel on the GPU.

Newer releases of CUDA (since CUDA 11.4+) have added more fine-grained resource provisioning in terms of being able to specify limits on the amount of memory allocatable (CUDA_MPS_PINNED_DEVICE_MEM_LIMIT) and the available compute to be used by MPS clients (CUDA_MPS_ACTIVE_THREAD_PERCENTAGE). For more information about the usage of these tuning knobs, see the Volta MPS Execution Resource Provisioning.

The tradeoffs with MPS are the limitations with error isolation, memory protection, and quality of service (QoS). The GPU hardware resources are still shared among all MPS clients. You can CUDA MPS with Kubernetes today but NVIDIA plans to improve support for MPS over the coming months.

The mechanisms discussed so far rely either on changes to the application using the CUDA programming model APIs, such as CUDA streams, or CUDA system software, such as time-slicing or MPS.

With MIG, GPUs based on the NVIDIA Ampere Architecture, such as NVIDIA A100, can be securely partitioned up to seven separate GPU Instances for CUDA applications, providing multiple applications with dedicated GPU resources. These include streaming multiprocessors (SMs) and GPU engines, such as copy engines or decoders, to provide a defined QoS with fault isolation for different clients such as processes, containers or virtual machines (VMs).

When the GPU is partitioned, you can use the prior mechanisms of CUDA streams, CUDA MPS, and time-slicing within a single MIG instance.

For more information, see the MIG user guide and MIG Support in Kubernetes.

NVIDIA vGPU enables virtual machines with full input-output memory management unit (IOMMU) protection to have simultaneous, direct access to a single physical GPU. Apart from security, NVIDIA vGPU brings in other benefits such as VM management with live VM migration and the ability to run mixed VDI and compute workloads, as well as integration with a number of industry hypervisors.

On GPUs that support MIG, each GPU partition is exposed as a single-root I/O virtualization (SR-IOV) virtual function for a VM. All VMs can run in parallel as opposed to being time-sliced (on GPUs that do not support MIG).

Table 1 summarizes these technologies including when to consider these concurrency mechanisms.

With this background, the rest of the post focuses on oversubscribing GPUs using the new time-slicing APIs in Kubernetes.

NVIDIA GPUs are advertised as schedulable resources in Kubernetes through the device plugin framework. However, this framework only allows for devices, including GPUs (as nvidia.com/gpu)  to be advertised as integer resources and thus does not allow for oversubscription. In this section, we discuss a new method for oversubscribing GPUs in Kubernetes using time-slicing.

Before we discuss the new APIs, we introduce a new mechanism for configuring the NVIDIA Kubernetes device plugin using a configuration file.

The Kubernetes device plugin offers a number of options for configuration, which are set either as command-line options or environment variables, such as setting MIG strategy, device enumeration, and so on. Similarly, gpu-feature-discovery (GFD) uses a similar option for generating labels to describe GPU nodes.

As configuration options become more complex, you use a configuration file to express these options to the Kubernetes device plugin and GFD, which is then deployed as a configmap object and applied to the plugin and the GFD pods during startup.

The configuration options are expressed in a YAML file. In the following example, you record the various options in a file called dp-example-config.yaml, created under /tmp.

Then, start the Kubernetes device plugin by specifying the location of the config file and using the gfd.enabled=true option to start GFD as well:

The configuration is applied to all GPUs on all nodes by default. The Kubernetes device plugin enables multiple configuration files to be specified. You can override the configuration on a node-by-node basis by overwriting a label on the node.

The Kubernetes device plugin then enables dynamic changes to the configuration whenever the node label is overwritten, allowing for configuration on a per-node basis if so desired:

To support time-slicing of GPUs, you extend the definition of the configuration file with the following fields:

That is, for each named resource under sharing.timeSlicing.resources, a number of replicas can now be specified for that resource type.

Moreover, if renameByDefault=true, then each resource is advertised under the name source-name>.shared instead of simply .

The failRequestsGreaterThanOne flag is false by default for backward compatibility. It controls whether pods can request more than one GPU resource. A request of more than one GPU does not imply that the pod gets proportionally more time slices, as the GPU scheduler currently gives an equal share of time to all processes running on the GPU.

The failRequestsGreaterThanOne flag configures the behavior of the plugin to treat a request of one GPU as an access request rather than an exclusive resource request.

As the new oversubscribed resources are created, the Kubernetes device plugin assigns these resources to the requesting jobs. When two or more jobs land on the same GPU, the jobs automatically use the GPU’s time-slicing mechanism. The plugin does not offer any other additional isolation benefits.

However, when renameByDefault=false, the following suffix is also added to the nvidia.com/.product label:

Using these labels, you have a way of selecting a shared or non-shared GPU in the same way you would traditionally select one GPU model over another. That is, the SHARED annotation ensures that you can use a nodeSelector object to attract pods to nodes that have shared GPUs on them. Moreover, the pods can ensure that they land on a node that is dividing a GPU into their desired proportions using the new replicas label.

Here’s a complete example of oversubscribing GPU resources using the time-slicing APIs. In this example, you walk through the additional configuration settings for the Kubernetes device plugin and GFD) to set up GPU oversubscription and launch a workload using the specified resources.

You enable time-slicing in the following example configuration. In this example, oversubscribe the GPUs by 2x:

Set up the Helm chart repository:

Now, deploy the Kubernetes device plugin by specifying the location to the config file created earlier:

As the node only has a single physical GPU, you can now see that the device plugin advertises two GPUs as allocatable:

Next, deploy two applications (in this case, an FP16 CUDA GEMM workload) with each requesting one GPU. Observe that the applications context switch on the GPU and thus only achieve approximately half the peak FP16 bandwidth on a T4.