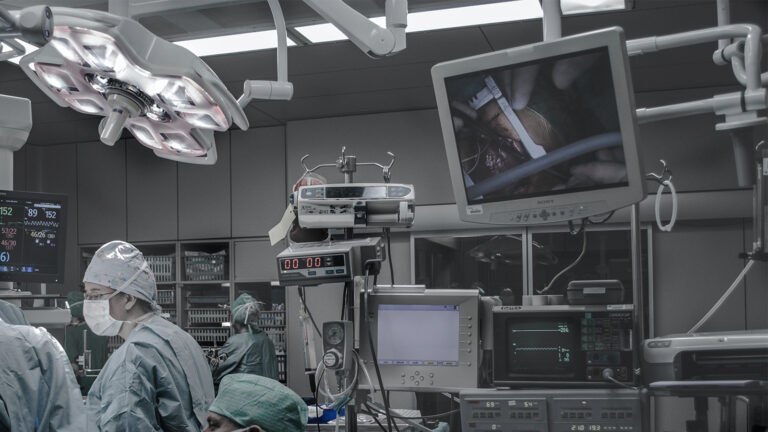 The release also consists of:

The most significant change in the Clara Holoscan SDK 0.2 is the shift of the core backend from GStreamer to the NVIDIA GXF. GXF is a framework supporting component-based programming for streaming data processing pipelines. It is built for very efficient data ingestion, data transfer, and AI/ML workloads.

With GXF, developers can create reusable components and combine them in graphs to build applications for different products quickly. GXF supports the processing of video and AU streams as well as user-defined streaming data types used in medical devices such as raw ultrasound, radiology imaging scanners, and microscopes.

A recent test using the NVIDIA Latency Display Analysis Tool on a 1080p video stream showed that GXF offers a significant speedup compared to previous solutions. In the test, GXF reduced the overhead in an AI Inferencing application by nearly 3x compared to a similar GStreamer-based pipeline in the Clara Holoscan SDK 0.1.

First is a scheduler that determines when components execute. The scheduler supports single or multithreaded execution, with conditional execution, asynchronous scheduling, and other custom tools.

Second, GXF has a memory allocator that provides a system with an upfront allocation of a large contiguous memory pool and reuses regions as needed. To ensure zero-copy data exchange between components, memory can be pinned to the device.

Digital endoscopy has evolved as a key technology for medical screenings and minimally invasive surgeries. Using real-time AI platforms to process and analyze the video signal produced by the endoscopic camera has been growing.

This technology is helping with anomaly detection and measurements, image enhancements, alerts, and analytics. The Clara Holoscan SDK 0.2 includes a sample AI-enabled endoscopy application showcasing the end-to-end functionality of GXF and support for devices that interface with AJA with an HDMI input.

The endoscopy AI sample application has a deep learning model to perform object detection and tool tracking in real time on an endoscopy video stream.

The application uses several NVIDIA features to minimize the overall latency, including:

To learn more about the endoscopy AI sample application, its hardware and software reference architecture on Clara Holoscan, as well as the path to production, download the Clara Holoscan Endoscopy Whitepaper.

Bring your own model AI application

Developers can bring their own AI model into the Clara Holoscan reference pipeline to create their own streaming workflow quickly. Swapping out of one model for another is accomplished by updating one configuration file and exporting data to the GXF native data format. Models saved in portable ONNX, as well as the NVIDIA performance-optimized TRT format, can be run on GXF’s built-in inference engines.

Support for the Clara Developer Kit

This kit is the ideal solution for developing the next generation of software-defined medical devices. Orin is geared for autonomous machines with high-speed interface support for multiple sensors and 8X the performance of the last generation for multiple concurrent AI inference pipelines.

The NVIDIA JetPack SDK contains the base OS for the Clara Holoscan SDK. For version 0.2, the JetPack SDK is being upgraded from version 4.5 to version 5.0HP1. This upgrades the OS to L4T rel-34, to be on par with Ubuntu 20.04 with LTS Kernel 5.10.

Get started with the Clara Holoscan SDK

The Clara Holoscan SDK 0.2 and source code are now accessible on GitHub with an Apache 2.0 license.