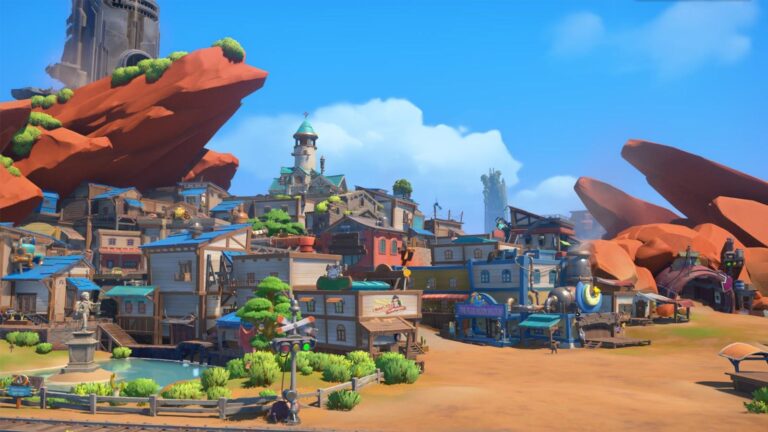 NVIDIA spoke with Chief Wizard of Pathea, Jingyang Xu, about himself, his company, and the process of implementing NVIDIA Reflex in My Time at Sandrock, the studio’s latest…

NVIDIA spoke with Chief Wizard of Pathea, Jingyang Xu, about himself, his company, and the process of implementing NVIDIA Reflex in My Time at Sandrock, the studio’s latest release.

For those who may not know you, could you tell us about yourself?

My name is Jingyang Xu. I am the Chief Wizard for Pathea. In other words, I’m the Head of Technology. I’ve had various jobs in the software industry for the last 23 years and recently joined Pathea.

Tell us about Pathea and the success of the company thus far?

Pathea has developed a few games that the readers may have heard of, including Planet Explorers and My Time at Portia. Currently, we are working on a few titles, including My Time at Sandrock, part of the “My Time” series. Like Portia, you take up the role of a builder in a post-apocalyptic world. We’ve gone early access on Steam, WeGame, Epic, and Bilibili.

Why did you decide to integrate Reflex?

We are always open to the latest and greatest in gaming technology out there to provide the best experience for the players. So, when NVIDIA kept telling us how great Reflex is, we went ahead with it.

What challenge were you looking to solve with Reflex?

A few spots in the game require quick reflexes to complete the mission with the best result. So, we hoped that Reflex would allow the players to have great fun doing those missions.

How long did it take for you to get Reflex up and running in My Time in Sandrock?

NVIDIA provided us with a plugin for Unity; it only took a couple of hours to get Reflex up and running.

How difficult was the Reflex integration process with Unity?

The hard part is to locate the issue. Our testing didn’t initially find any problems. However, there was an issue with some missing DLLs on certain players’ machines. NVIDIA quickly fixed the issues. The problem caused some players’ experiences to be less than satisfactory, but NVIDIA responded quickly and helped Sandrock and us overcome it.

Any surprises or unexpected challenges?

We were surprised by how quickly NVIDIA responded when we had the issues. When we were trying to employ Reflex, we talked with them, and they gave us many solutions and suggestions to help us. The turnaround was super quick! More than that, NVIDIA spent time helping us to test to ensure that it runs well.

How has Reflex affected gameplay?

We have tested the performance and the results are very positive. We saw a 20%-30% increase in input responsiveness with our test. You can easily find the speed changes, which make us feel more confident that the gaming experience will be much better than before.

Any tips or lessons learned for other developers looking into Reflex?

We think it’s worth trying, and don’t worry about any problems, because NVIDIA will help you fix them. Just keep regular communications with NVIDIA. If it fits your gameplay, we believe it shows promise.

Do you plan on integrating NVIDIA Reflex in future titles?

Definitely. We have a couple of games in the pipeline that I think Reflex will be great for in the future. We believe Reflex is an excellent way to reduce game latency. It has been proven in Sandrock, and we believe it can be used in our other games to get the same results. Based on that, Reflex is very useful for making better games.