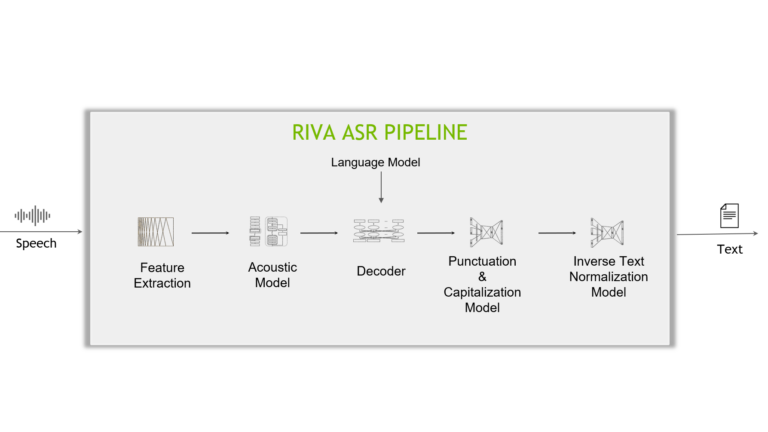 NVIDIA Riva facilitates the process of creating ASR services with the tools and methodologies to help you realize your skills, all the way from raw data to a ready-to-use service.

Speech AI is the ability of intelligent systems to communicate with users using a voice-based interface, which has become ubiquitous in everyday life. People regularly interact with smart home devices, in-car assistants, and phones through speech. Speech interface quality has improved leaps and bounds in recent years, making them a much more pleasant, practical, and natural experience than just a decade ago.

Components of intelligent systems with a speech AI interface include the following:

ASR is the first component of any speech AI system and plays a critical role. Any error made early in the ASR phase is then compounded by issues in the subsequent intent analysis and fulfillment phase.

There are over 6500 spoken languages in use today, and most of them don’t have commercial ASR products. ASR service providers cover a few dozen at most. NVIDIA Riva currently covers five languages (English, Spanish, German, Mandarin, and Russian), with more scheduled for the upcoming releases.

While this set is still small, luckily Riva provides ready-to-use workflow, tools, and guidance for you to bring up an ASR service for a new language quickly, systematically, and easily. In this post, we present the workflow, tools, and best practices that the NVIDIA engineering team employed to make new world-class Riva ASR services. Start the journey!

The anatomy of a Riva ASR pipeline

Take a deeper look into the inner working of a Riva ASR pipeline, which includes the following main components:

Like solving other AI and machine learning problems, creating a new ASR service from scratch is a capital-intensive task involving data, computation, and expertise. Riva significantly reduces these barriers.

With Riva, making a new ASR service for a new language requires, at the minimum, collecting data and training a new acoustic model. The feature extractor and the decoder are readily provided.

The language model is optional but is often found to improve the accuracy of the pipeline up to a few percent and is often well worth the effort. P&C and ITN further improve the text readability for easier human consumption or further processing tasks.

The Riva new language workflow is divided into the following major phases:

In the next sections, we discuss the details of each stage.

When adapting Riva to a whole new language, a large amount of high-quality transcribed audio data is critical for training high-quality acoustic models. Where applicable, there are several significant sources of public datasets that you can readily leverage:

The data preparation phase carries out the steps required to convert the diverse raw audio datasets into a uniform format efficiently digestable by the NVIDIA NeMo toolkit, which is used for training.

Data preprocessing is required to convert the audio or text data input into a readable format for your machine learning algorithms.

Audio data acquired from various sources is inherently heterogeneous (file format, sample rate, bit depth, number of audio channels, and so on). As a preprocessing step, you build a separate data ingestion pipeline for each source and convert the audio data to a common format:

Dataset ingestion scripts are used to convert the various datasets into the standard manifest format.

Text cleaning removes characters that are not part of the language alphabet. For example, we observed and removed some Chinese characters in the public dataset for German collected from MCV, MLS, and Voxpopuli.

Text normalization converts text from written form into its verbalized form. It is used as a preprocessing step for preprocessing ASR training transcripts.

This step is carried out to filter out some outlying samples in the datasets. As the simplest procedure, samples that are too long, too short, or empty are filtered out.

In addition, you can also filter out samples that are considered ‘noisy.’ This would include samples having a high word error rate (WER) or character error rate (CER) with regard to a previously trained ASR model.

A manual inspection of these noisy samples can also reveal problematic issues with some samples, such as the transcription not matching the audio.

For training ASR models, audio with different lengths may be grouped into a batch, with padding to make them all the same length. The extra padding is a significant source of computation waste.

Splitting the training samples into buckets with different lengths and sampling from the same bucket for each batch increases the computation efficiency. It may result in training speedup of more than 2x.

This step is a staple of any deep learning and machine learning development pipeline, to ensure that the model is learning to generalize without overfitting the training data. For the test set, use additionally curated data that isn’t from the same source as the training datasets, such as YouTube and TED talks.

Suppose the experiments run on a cluster with datasets stored on a distributed file system. In that case, you will likely want to avoid constantly reading multiple small files and will tar the audio files instead.

The acoustic models are the most important part of an ASR service. They are the most resource-intensive models, requiring a large amount of data to train on powerful GPU servers or clusters. They also have the largest impact on the overall ASR quality.

Some acoustic models supported by Riva are QuartzNet, CitriNet, Jasper, and Conformer.

When carrying out transfer learning, you must use a lower learning rate compared to training from scratch. When training models such as Conformer and CitriNet, we have also found that using large batch sizes in the [256, 2048] range helps stabilize the training loss.

All Riva ASR models in production other than English were trained with cross-language transfer learning from an English base model that was trained with the most audio hours.

A language model can give a score indicating the likelihood of a sentence appearing in its training corpus. For example, a model trained on an English corpus judges “Recognize speech” as more likely than “Wreck a nice peach.” It also judges “Je suis un étudiant” as quite unlikely, as that is a French sentence.

The language model, combined with beam search in the decoding phase, can further improve the quality of the ASR pipeline. In our experiments, we generally observe an additional 1-2% of WER reduction by using a simple n-gram model.

When coupled with a language model, a decoder would be able to correct what it “hears” (for example, “I’ve got rose beef for lunch”) to what makes more sense (“I’ve got roast beef for lunch”). The model gives a higher score for the latter sentence than the former.

Create a training set by combining all the transcript text in the ASR set, normalizing, cleaning, and then tokenizing using the same tokenizer used for ASR transcript preprocessing mentioned earlier. The language models supported by Riva are n-gram models, which can be trained with the KenLM toolkit.

The P&C model consists of the pretrained Bidirectional Encoder Representations from Transformers (BERT) followed by two token classification heads. One classification head is responsible for the punctuation task, and the other one handles the capitalization task.

Use the NeMo text inverse normalization module for the task. NeMo ITN is based on weighted finite-state transducer (WFST) grammars. The tool uses Pynini to construct WFSTs, and the created grammars can be exported and integrated into Sparrowhawk (an open-source version of the Kestrel TTS text normalization system) for production.

When all the models have been trained, it’s time to deploy them to Riva for serving.

Bring your own models

Given the final .nemo models that you have trained so far, here are the steps and tools that are required to deploy on Riva:

After the server successfully starts up, you can query the service to measure accuracy, latency, and throughput.

Alternatively, you can make use of Riva pretrained models published on NGC. These models can be deployed as-is or served as a starting point for fine-tuning and further development.

For German, there are several significant sources of public datasets that you can readily access:

In addition, we acquired proprietary data for a total of 3,500 hours of training data!

We started the training of the final model from a NeMo DE Conformer-CTC large model (trained on MCV7.0 for 567 hours, MLS for 1,524 hours and VoxPopuli for 214 hours), which itself was trained using an English Conformer model as initialization (Figure 5).

All Riva German assets are published on NGC (including .nemo, .riva, .tlt, and .rmir assets). You can use these models as starting points for your development.

NGC provides an OpenFST finite state archive (.far) for use within the open source Sparrowhawk normalization engine and Riva.

For Hindi, you can readily access the Hindi-Labelled ULCA-asr-dataset-corpus public dataset:

Getting started and bring your own languages

The NVIDIA Riva Speech AI ecosystem (including NVIDIA TAO and NeMo) offer comprehensive workflows and tools for new languages, making it a systematic approach to bringing your own language onboard.

Whether you are fine-tuning an existing language model for a domain-specific application or implementing one for a brand-new dialect with little or lots of data, Riva offers those capabilities.

For more information about how NVIDIA Riva ASR engineering teams bring up a new language, see the Riva new language tutorial series and apply it to your own project.