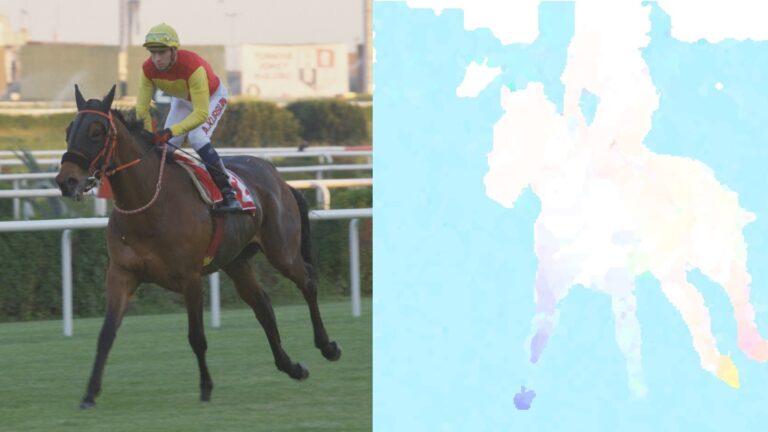 To enable you to fully harness the new hardware upgrades, NVIDIA is announcing accompanying updates to the Video Codec SDK and Optical Flow SDK.

Hardware-accelerated AV1 encoding is a huge milestone in transitioning AV1 to be the new standard video format. Figure 1 shows how the AV1 bit-rate savings translate into impressive performance boosts and higher fidelity images.

As Figure 2 shows, at 1440p and 2160p, NVENC AV1 is 1.45x more efficient than NVENC H.264. This new performance headroom enables higher than ever image quality, including 8k.

The benefits of AV1 are best used in unison with the multi-encoder design featured on the NVIDIA Ada Architecture. New to Video Codec SDK 12.0 on chips with multiple NVENC, the processing load is evenly distributed across each encoder simultaneously. This optimization creates a huge reduction in encoding times. Multiple encoders in combination with the AV1 format allows NVIDIA Ada to support an incredible 8k at 60 fps video encode in real time.

AV1 encoding across multiple hardware NVENC is enabling the next generation of video performance and fidelity. Broadcasters can achieve higher livestream resolutions, video editors can export video at 2x speed, and all this is enabled by the Video Codec SDK.

NVIDIA Video Codec SDK 12.0 will be available to download from the NVIDIA Developer Center in October 2022.

The NVIDIA Ada Lovelace Architecture has a new optical flow accelerator, NVOFA, that is 2.5x more performant than the NVIDIA Ampere Architecture NVOFA. It provides a 15% quality improvement on popular benchmarks including KITTI and MPI Sintel.

The FRUC library uses the NVOFA and CUDA to interpolate frames significantly faster than software-only methods. It also works seamlessly with custom DirectX or CUDA applications, making it easy for developers to integrate.

Frame interpolation using the FRUC library is extremely fast compared to other software-only methods. The APIs are easy to use, and support ARGB and NV12 input surface formats. It can be directly integrated into any DirectX or CUDA application.

The sample application source code included in the SDK demonstrates how to use FRUC APIs for video FRUC. This source code can be reused or modified as required to build a custom application.

The Video 1 sample was created using the FRUC library. As you can see, the motion of foreground objects and background appears much smoother in the right video compared to the left video.

Here is a brief explanation about how FRUC library processes a pair of frames and generates an interpolated frame.

A pair of consecutive frames (previous and next) are input into the FRUC library (Figure 4).

Using a complete flow vector map between the two frames, the algorithm generates an interpolated frame between the two input frames. Such an image may contain few holes (pixels that don’t have valid color). This figure shows a few small gray regions near the head of the horse and in the sky that are holes.

Holes in the interpolated frame are filled using image domain hole infilling techniques to generate the final interpolated image. This is the output of the FRUC library.

Lastly, to expand the platforms that can harness the NVOFA hardware, Optical Flow SDK 4.0 also introduces support for Windows Subsystem for Linux.

Harness the NVIDIA Ada Architecture and the FRUC library when the NVIDIA Optical Flow SDK 4.0 is available in October. If you have any questions, contact Video DevTech Support.