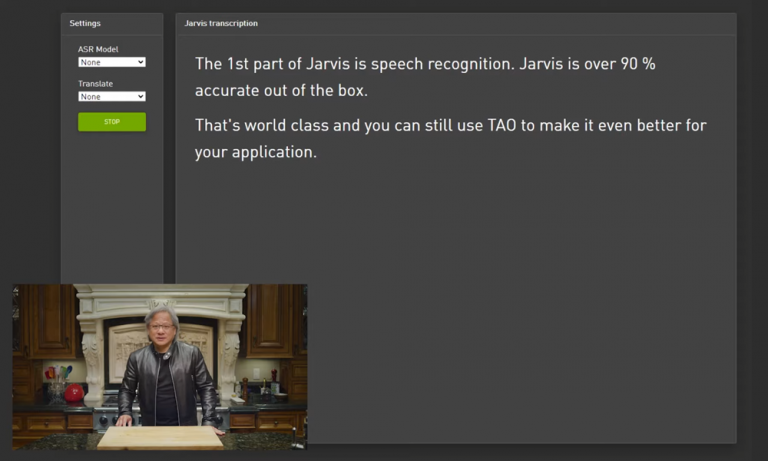 Jarvis world class speech recognition is an out-of-the-box speech service that can be easily deployed in any cloud or datacenter. Enterprises can use Transfer Learning Toolkit (TLT) to customize speech service across a variety of industries and use cases.  With TLT, developers can accelerate development of custom speech and language models by 10x.

The speech recognition model is highly accurate and trained on domain-agnostic vocabulary from telecommunications, finance, healthcare, education, and also various proprietary and open-source datasets. Additionally, it was trained on noisy data, multiple sampling rates including 8khz for call centers, variety of accents, and dialogue all of which contribute to the model’s accuracy.

With Jarvis speech service, you can generate a transcription in under 10 milliseconds. It is evaluated on multiple proprietary datasets with over ninety percent accuracy and can be adapted to a wide variety of use cases and domains. It can be used in several apps such as transcribing audio in call centers, video conferencing and in virtual assistants.

T-Mobile, one of the largest telecommunication operators in the United States, used Jarvis to offer exceptional customer service.

You can download Jarvis speech service from the NGC Catalog to start building your own transcription application today.

Highlights of this version include:

Also, most NeMo models can be exported to NVIDIA Jarvis for production deployment and high-performance inference.

Learn more about what is included in NeMo 1.0 from the NVIDIA Developer Blog. NeMo is open-sourced and is available for download and use from the NGC Catalog and GitHub.