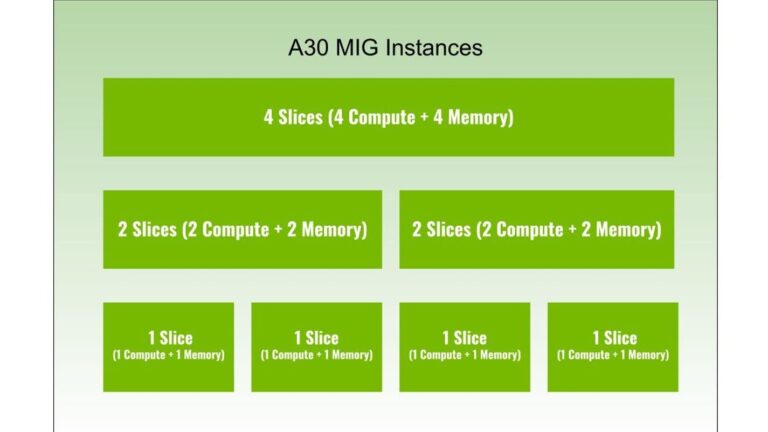 Multi-Instance GPU (MIG) is an important feature of NVIDIA H100, A100, and A30 Tensor Core GPUs, as it can partition a GPU into multiple instances. Each…

Multi-Instance GPU (MIG) is an important feature of NVIDIA H100, A100, and A30 Tensor Core GPUs, as it can partition a GPU into multiple instances. Each instance has its own compute cores, high-bandwidth memory, L2 cache, DRAM bandwidth, and media engines such as decoders.

This enables multiple workloads or multiple users to run workloads simultaneously on one GPU to maximize the GPU utilization, with guaranteed quality of service (QoS). A single A30 can be partitioned into up to four MIG instances to run four applications in parallel.

This post walks you through how to use MIG on A30 from partitioning MIG instances to running deep learning applications on MIG instances at the same time.

A GPU instance is a combination of GPU slices and GPU engines (DMAs, NVDECs, and so on). A GPU slice is the smallest fraction of the GPU that combines a single GPU memory slice and a single streaming multiprocessor (SM) slice.

Within a GPU instance, the GPU memory slices and other GPU engines are shared, but the SM slices could be further subdivided into compute instances. A GPU instance provides memory QoS.

You can configure an A30 with 24 GB of memory to have:

GPC (graphics processing cluster) or slice represents a grouping of the SMs, caches, and memory. The GPC maps directly to the GPU instance. OFA (Optical Flow Accelerator) is an engine on the GA100 architecture on which A100 and A30 are based. Peer-to-peer (P2P) is disabled.

Table 2 provides profile names of the supported MIG instances on A30, and how the memory, SMs, and L2 cache are partitioned among the MIG profiles. The profile names for MIG can be interpreted as its GPU instance’s SM slice count and its total memory size in GB. For example:

By looking at the SM slice count of 2 or 4 in 2g.12gb or 4g.24gb, respectively, you know that you can divide that GPU instance into two or four compute instances. For more information, see Partitioning in the MIG User Guide.

MIG 1g.6gb+me: me means media extensions to get access to the video and JPEG decoders when creating the 1g.6gb profile.

MIG instances can be created and destroyed dynamically​. Creating and destroying does not impact other instances, so it gives you the flexibility to destroy an instance that is not being used and create a different configuration.

Automate the creation of GPU instances and compute instances with the MIG Partition Editor (mig-parted) tool or by following the nvidia-smi mig commands in Getting Started with MIG.

The mig-parted tool is highly recommended, as it enables you to easily change and apply the configuration of the MIG partitions each time without issuing a sequence of nvidia-smi mig commands. Before using the tool, you must install the mig-parted tool following the instructions or grab the prebuilt binaries from the tagged releases.

Here’s how to use the tool to partition the A30 into four MIG instances of the 1g.6gb profile. First, create a sample configuration file that can then be used with the tool. This sample file includes not only the partitions discussed earlier but also a customized configuration, custom-config, that partitions GPU 0 to four 1g.6gb instances and GPU 1 to two 2g.12gb instances.

Next, apply the all-1g.6gb configuration to partition the A30 into four MIG instances. If MIG mode is not already enabled, then mig-parted enables MIG mode and then creates the partitions:

You can easily pick other configurations or create your own customized configurations by specifying the MIG geometry and then using mig-parted to configure the GPU appropriately.

After creating the MIG instances, now you are ready to run some workloads!

You can run multiple deep learning applications simultaneously on MIG instances. Figure 1 shows four MIG instances (four GPU instances, each with one compute instance), each running a model for deep learning inference, to get the most out of a single A30 for four different tasks at the same time.

For example, you could have ResNet50 (image classification) on instance one, EfficientDet (object detection) on instance two, BERT (language model) on instance three, and FastPitch (speech synthesis) on instance four. This example can also represent four different users sharing the A30 at the same time with ensured QoS.

To analyze the performance improvement of A30 with and without MIG enabled, we benchmarked the fine-tuning time and throughput of the BERT PyTorch model for SQuAD (question answering) in three different scenarios on A30 (with and without MIG), also on T4.

To run this example, use the instructions in Quick Start Guide and Performance benchmark sections in the NVIDIA/DeepLearningExamples GitHub repo.

Based on the experimental results in Table 3, A30 with four MIG instances shows the highest throughput and shortest fine-tuning time for four models in total.

Fine-tuning on A30 with four models simultaneously without MIG can also achieve high GPU utilization, but the difference is that there is no hardware isolation such as MIG provides. It incurs overhead from context switching and leads to lower performance compared to using MIG.

Built on the latest NVIDIA Ampere Architecture to accelerate diverse workloads such as AI inference at scale, A30 MIG mode enables you to get the most out of a single GPU and serve multiple users at the same time with quality of service.